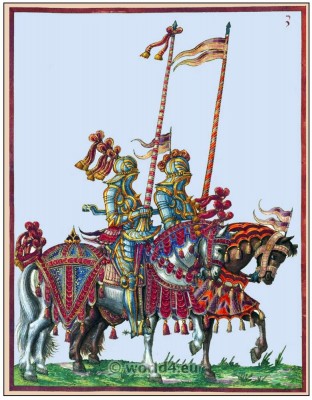 German knights in full armor riding to the tournament.

Since the 15th Century, the joust was no longer relevant as a military training and developed into sport. Especially under Maximilian I. of Habsburg (1459-1519), called the last knight, developed from the 1490s, a real “jousting industry” with competitions under different rules and different, specially designed equipment. Paulus Hector Mair in the 1540s provides a list of more than a dozen different types of jousting.