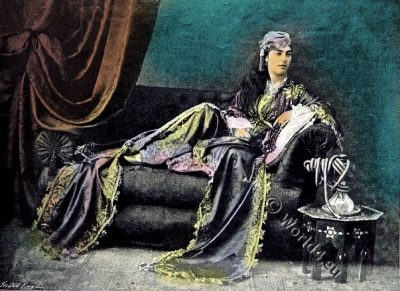 The Harem, joined to the Sultan’s private apartments by a long passage, is barred by avery handsome door— “The Door of Felicity” — through which no profane foot of male may pass while the “beauties” are in residence. Just now this portion is tenantless; but there was a time, during Abdul Aziz’s reign, when it was crowded with beautiful houris from Circassia, Georgia, and other favoured places.

It is said that when Sultan Abdul Aziz was deposed, as many as fifty or sixty boat-loads of these ladies were carried off to the Old Seraglio for safety, where, after remaining awhile, they were either married or otherwise provided for. From the threshold of this “abode of bliss” we take our survey. We see the windows, so easily recognized by their wooden gratings, which permit those behind them of seeing the outer world without themselves being seen— like the ladies who once lived here, the Harem wears a veil to screen it from vulgar eyes. The floors are covered with rich carpets, and the divans round some of the apartments are covered with handsome brocade. As bedsteads are not generally used by the Turks, mattresses are nightly spread on the floors and are removed in the morning, being stowed away in the cupboards which are built in the walls. As these quarters have not been occupied for some time we see none of the beautiful cashmeres, or striped chintzes, or Damascus silks, which,no doubt, were freely used for coverings of divans and pillows, or the many lovely things which, doubtless, are in profusion when the ladies are in residence. We were permitted just to peep within the Lady Superintendent’s * sumptuously-furnished room at one end of the corridor.
The doors of the Sultana Valide’s suite of rooms were locked, so we saw nothing of her apartments; however, we were informed they were remarkable for beautifully- painted ceilings. All the fittings were of crystal and silver; mirrors and consoles of elegant design— in fact, everything was of truly Oriental magnificence. The expense of keeping up this Harem establishment— for drugs, clothing, jewels, cosmetics, &c, for the ladies— averaged over two million pounds sterling per annum; while another half-a-million was annually required for food for the inmates and their attendants.

Life on the Bosphorus. Doings in the city of the Sultan. Turkey, past and present, including chronicles of the Caliphs from Mahomet to Abdul Hamid II. by William J. J. Spry. Published: London H. S. Nichols 1895.