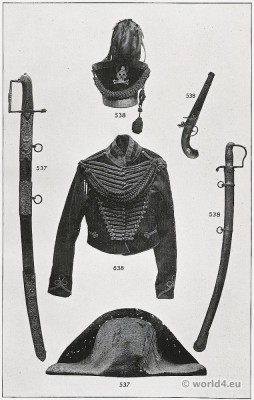 Hat & sword of Napoleon Bonaparte I.

No. 537. Hat & sword of Napoleon Bonaparte from the possession of the senator Zarnelli in Milan. The hat is still republican and 53.1 / “cm long, the front whipped edge 18.1 /, cm, the rear 21 cm high, the cockade missing. At the brim, the high age can be clearly seen. In places, the material is brittle and often pierced, the head is replaced. The saber sits in a rectangular, gold-plated vessel with single strap, which terminates in a dolphin head, the knob shows the shape of a lion’s head. The broad, slightly curved blade shows 2 half blurred trophy ornaments. The scabbard of black leather carrying 3 highly gilt bronze fittings, decorated with chased and engraved ornaments, including 6 trophy rosettes. Of the various hats of Napoleon are for Ex. only about 9 pieces as a known obtained, of which only one of the consular time.

No. 538. Lützow Free Corps. Shako with plume, pistol and saber with buckets of the Lützow’schen riding hunter Fritz Keller from Breslau. On shako is still the little skull that after regimental orders of 3 January 1814 was no longer supported. The Lützow Free Corps was a voluntary association of the Prussian army in the wars of liberation 1813-14.