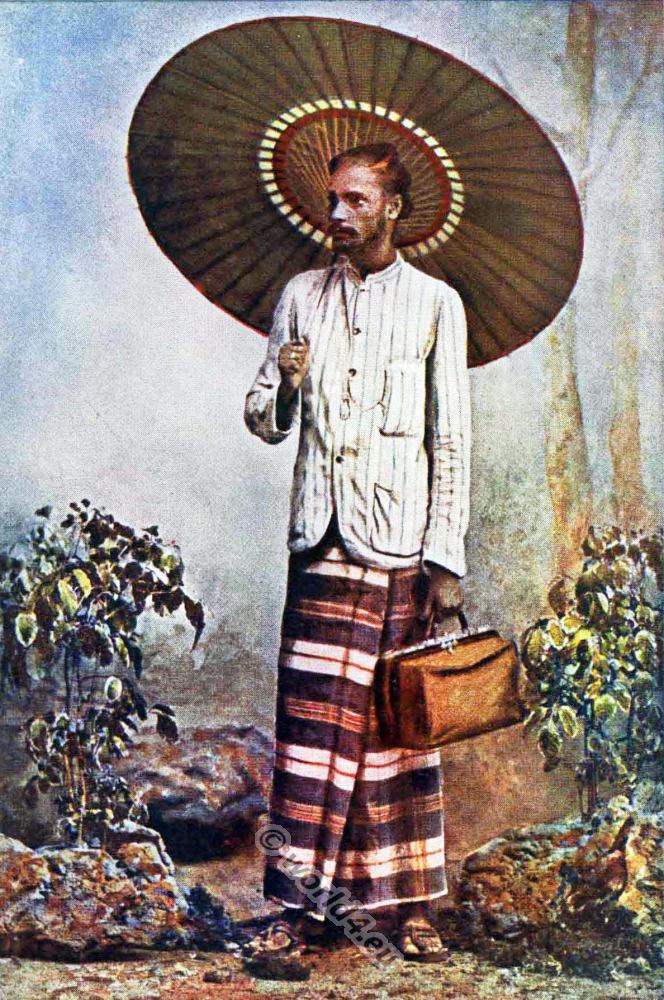 Sinhalese in a traditional sarong with Umbrella.

The dress of the men, in that bright isle “where every prospect pleases, and only man is vile,” differs considerably from that of the native of India. This, however, does not apply to the women, who might very easily be mistaken for Hindus by anyone who was not cognizant of certain small details. The men dress in a comboy (sarong or amude), which is formed of a long piece of cloth, sewn together at the two ends. This resembles a skirt, but having no gathers in it, the top is equal in size to the width of the bottom. Any difficulty, however, which might be imagined to exist, is overcome by the wearer pleating up the garment in front, and then making one large lap of the whole from right to left. He then either rolls the comboy over at the top, by which means it is easily supported or puts on a belt. A jacket of European cut, with a military shaped collar, is worn over a singlet; this, together with a comb upon his head and sandals on his feet, completes his attire.

Ceylon is the Emerald Isle of the East, and as rain is far more frequent there than in India, the island presents a never-ending panorama of tropical verdure of every shade, from the pale green lettuce plant to the begonia, the leaves of one variety of which are nearly black. Viewed in conjunction with the deep blue sky and dark red kabook roads, a most charming picture is formed, in nature’s richest colours.
Of recent years Colombo has become an important port of call, and owing to the enterprise of its European inhabitants it is still advancing by leaps and bounds. Streets have been widened, new and capacious buildings erected, and the whole town so altered and improved during the past ten years that one yearns in vain for a similar rate of progress in the city whose vainglorious boast it is to be the second in the Empire.

The Sinhalese very rarely work as coolies, either on tea estates or elsewhere, this work being almost exclusively carried on by Tamils from Southern India. They are generally sharper than Hindoos, and when carefully trained are capable of making very good workmen.
One of the favourite, and it is to be supposed the most lucrative, of trades in Ceylon is that of a jeweller. The island abounds in precious stones, of sorts, and the work of cutting, polishing, and selling them affords employment to a large number of natives, many of whom are Moors, or, as they are usually termed, Moormen, who have lived in Ceylon for generations.
The efforts of this gentry to dispose of worthless stones mounted in trashy settings are amusing, but it becomes an expensive form of entertainment if the wiles of the lustre merchant are permitted to prevail. Good stones are to be bought, but never from the hawkers, and as the shopkeepers are very excellent judges of the London market value of their wares, a bargain is usually to the advantage of the vendor.

In few ports are passengers so much bothered by hawkers as in Colombo. They surround the ship and climb on board almost before the anchor is down, their presence frequently becoming a veritable nuisance, as they follow one round with great persistence in their endeavours to make a bargain. For the benefit of the uninitiated, it may be remarked that there is a password which effects a certain cure. Say quietly, as if you knew all about it, ” Epah, pallian! ” which, being interpreted, means, “I don’t want any, get!” and your tormentor, regarding you as an individual acquainted with both his habits and his language, will promptly comply with your request.