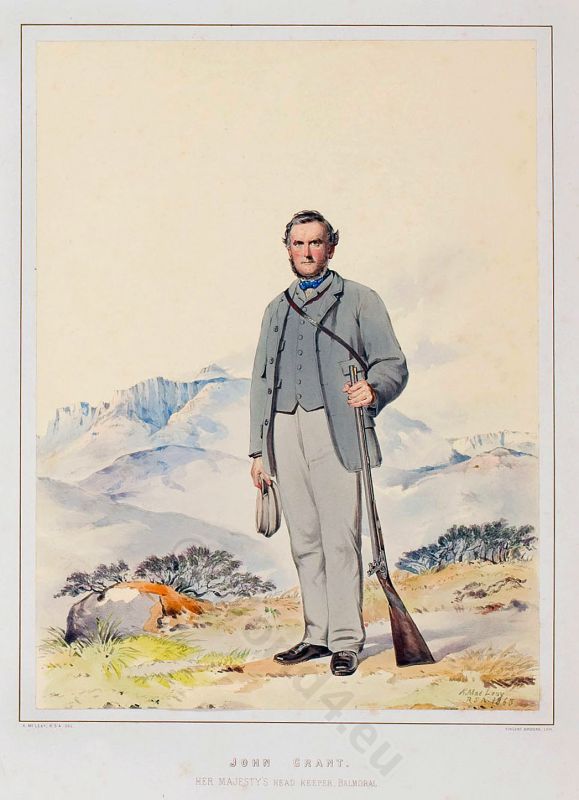 Born in the village of Auchindryne, Braemar, 10th August, 1810. His father, Alexander Grant, was born 1771; he was by trade a heckler (Anglice flaxdresser) in the winter, and a sawyer in the Braemar forests, during the summer. In 1818 he removed, with his family, from Braemar to Easter Balmoral, where he was employed as gamekeeper and ground officer, by the Earl of Fife (the proprietor at that time), in whose service he continued until his death, in 1846. His wife, Ann MacIntosh, from Coldrach, Braemar, is still alive. She was born in 1781, and is a fine, hale old woman, living in a cottage built for her by H.R.H. the Prince Consort, in Balmoral village. There were three sons, two of whom are now dead, and one daughter.

John Grant, the subject of the present sketch, was in his eighth year, when his father removed to Balmoral. For nearly half a century, he has traversed the woods and wilds of that varied estate, and his eye is familiar with every feature of the country. For several years he assisted his father in his duties, and in 1822 he was employed as gillie by Sir Robert Gordon, at that time, tenant of Balmoral. In 1839 he was made keeper, and held that situation until the death of Sir Robert, in 1847. After that event, he was engaged the same year, as head Forester by H.R.H. the Prince Consort, and entrusted with the management of the Balmoral deer-forest. For twelve years he was the constant attendant of the Prince, when deer-stalking; and since the lamented death of his Royal master (who had a great regard for him), John Grant continues at Balmoral, as the Queen’s Head Keeper, and resides at Croft, a house built for him on the property. He married, in 1841, Elizabeth Robbie, from the Spittal, and has six sons, one of who is in the Royal Establishment, and one daughter, called Victoria. He is an excellent and most trustworthy man, very straight-forward, shrewd, and discreet, and devotedly attached to his employers.
John Grant’s grandfather lived and died in Braemar; the family came there originally from Strathspey, and belong to the clan of the Grants, which is separately illustrated.
JOHN GRANT was permitted to wear trousers rather than the kilt, like the rest of the Queen’s retainers.

The Highlanders of Scotland.
PORTRAITS ILLUSTRATIVE OF THE PRINZIPAL CLANS AND FOLLOWINGS AND THE RETAINERS OF THE ROYAL HOUSEHOLD AT BALMORAL, IN THE REIGN OF HER MAJESTY QUEEN VICTORIA, BY KENNETH MACLEAY, ESQ., R.S.A.
With topious Notices from Authentic Sources. In colored Lithographs by Vincent Brooks.
London: Mr. Mitchel, Publisher to her Majsty, 33, Old Bond Street, W.
Edinburgh: Blackwood and Sons. 1870.