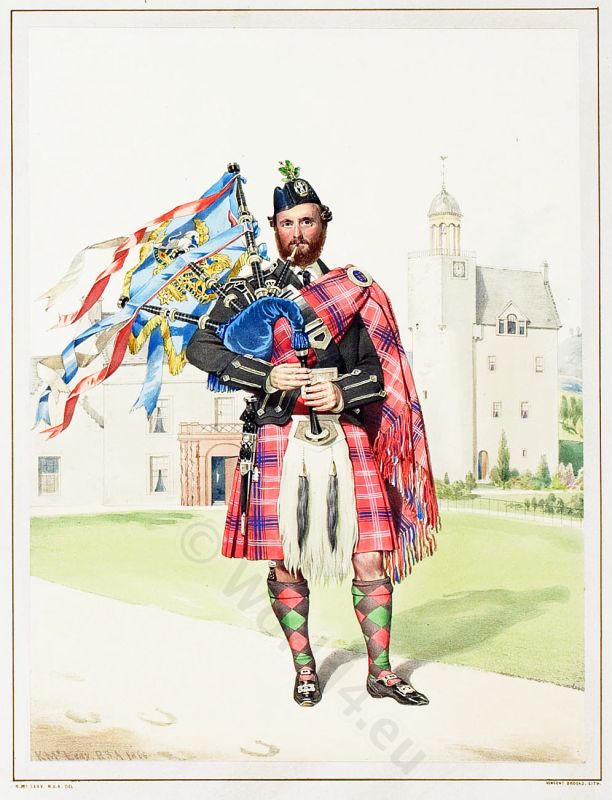 The Highlanders of Scotland. WILLIAM MACDONALD. H.R.H. The Prince of Wales Piper. Dressed in the tartan of the Duke of Rothesay, one of H.R.H.`s titles.

Born 1843, at Esgard, in Glen Urquhart. His father, Alexander Macdonald, was born in 1807, in Glen Urquart, on the Earl of Seafield`s property, and is a sawmiller in Lord Seafield`s employment. He married Mary Chisholm, born in the same glen, and has three sons and two daughters. The eldest son is a tenant in Strathspey; the second Alexander, is Piper to Mr. Macpherson, of Glen Truim; one of the daughters, wife of Donald Macdougall, smith, in Glen Urquhart, was pamted by Phillips, in one of his last sketches, entitled ” The Cradle.”
William Macdonald, the youngest son, was two years in Badenoch, in the employment of Mr. Macpherson, of Glen Traim, as gamekeeper, and afterwards two and a half years with John Fisher, Esq., tenant of the Shooting of Colonel Macpherson, of Belleville, also Badenoch. William Macdonald was appointed Piper to His Royal Highness the Prince of Wales in 1865. He is a very unassuming man, and a good servant. His ancestors followed Glengarry, as their Chief.
William MacDonald, painted at Abergeldie in 1866 for Queen Victoria by Kenneth MacLeay.

The Highlanders of Scotland.
Source: PORTRAITS ILLUSTRATIVE OF THE PRINZIPAL CLANS AND FOLLOWINGS AND THE RETAINERS OF THE ROYAL HOUSEHOLD AT BALMORAL, IN THE REIGN OF HER MAJESTY QUEEN VICTORIA, BY KENNETH MACLEAY, ESQ., R.S.A. With topious Notices from Authentic Sources. In colored Lithographs by Vincent Brooks. London: Mr. Mitchel, Publisher to her Majsty, 33, Old Bond Street, W. Edinburgh: Blackwood and Sons. 1870.