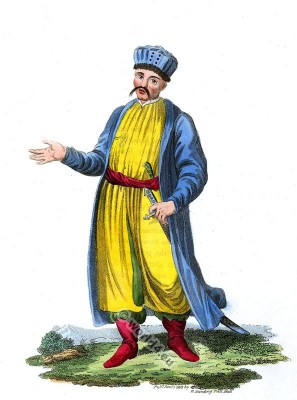 A Kabardian of Mount Caucasus.

A Kabardian of Mount Caucasus.

CAUCASUS is that vast chain of mountains, extending from the north-west to the south-east, between the Euxine and the Caspian Sea. It is the boundary marked out by nature between Russia and Persia. ” At the intervals of my short sojourn upon the mountains,” says Professor Pallas, in his `Observations made (luring a Journey through the Northern Governments of the Russian Empire in 1793 and 1794,’ ” i had repeated opportunities of making discoveries relative to the inhabitants of Caucasus. Much has already been written respecting the variety of nations, speaking different languages, established upon these mountains. Some writers have divided them into as many different nations, as they found names of tribes and families among them. Guldenstaedt may be considered as the first traveller who has had the merit, by discovering the affinity between the various dialects, of presenting us with a correct classification of all the tribes of these dispersed nations. I have endeavoured, as much as possible, to collect together the facts with which I have been furnished, partly from my own observation, and partly from persons who have explored these mountains.”
That warlike people, the Circassians, dwell chiefly in the mountains situated on this side of Caucasus, and extend as far as the beautiful plain which borders upon it, from which they have driven the ancient possessors, and taken possession of the greater part of it. These Circassians form a sort of knighthood, maintaining a system completely feudal between themselves and their vassals, similar to that which the German knights formerly introduced into Prussia and Livonia. Considered as vassals of the crown of Russia, by the last peace with the Ottoman Porte, the portion of territory belonging to that empire is distinguished into Great and Lesser Kabarda. The Kabardians trace their origin from the Arabs; and it is probable that they are the descendants of the armies sent, by the Caliphs of former times, towards the mountains of Caucasus. On the other hand, some writers suppose them to descend from the Mamelukes. The universal tradition, proving that they formerly inhabited the Crimea, is also confirmed, in this respect, by the de-nominations still existing. The upper part of the river Belbek in the Crimea is yet called Kabarda, in the same manner as the Tartars still give the appellation of Tscherkes-tus to the magnificent spot between that river and the Kastcha. The Circassians of Lesser Kabarda consider their frontiers as ex-tending from the right bank of the’Terek to the left of the Sunsha.