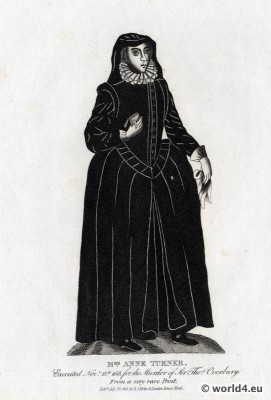 Mrs. Anne Turner (born Anne Norton 1576–1615), English maidservant convicted of the murder of Sir Thomas Overbury. The Thomas Overbury affair was the greatest scandal of seventeenth century England featuring a heady mix of adultery, murder and necromancy, and has been described as “one of the most sensational crimes in English history”. Mrs Anne Turner (1576 – 1615), was the widow of a respectable London doctor who was hanged at Tyburn for her role in the famous 1613 poisoning of Sir Thomas Overbury.

Turner was hanged at Tyburn on 15 November 1615. Her hangman, not by coincidence, also wore “bands and cuffs of the same colour.” Yellow starch then went out of fashion. Turner reportedly left behind three illegitimate children she had with the English politician Sir Arthur Mainwaring (c.1580 – 1648).

Note:  Queen Elizabeth the first. The days of Queen Bess. The Virgin Queen.