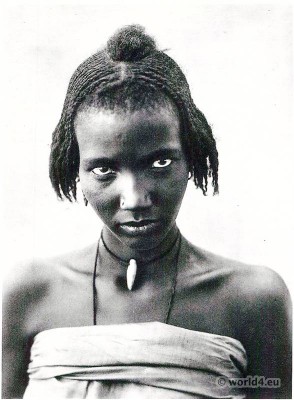 Girl of the African tribe of Kanembu from Lake Tchad 1930s.

Kanembu is the name of people who lives east of Lake Chad and belongs to the Republic of Chad. The people of the Kanembu has emerged from the kingdom of Kanem and also bears his name: Kanem-bu – “people of Kanem.” Kanem and Bornu were united to the beginning of the 19th century as part of the Kanem-Bornu Empire under the rule of Sefuwa.