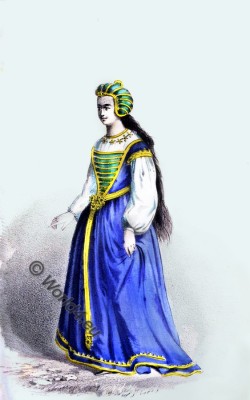 THIS costume belongs to the close of the fifteenth century, and is one of the most elegant of this epoch. This noble lady wears over her breast an article of attire of a peculiar fashion, which was very generally adopted about the end of the fifteenth and the beginning of the sixteenth centuries. Her dress is also characterized by the long, trailing sleeves of the chemise, similar in mode to those of the men of the times.