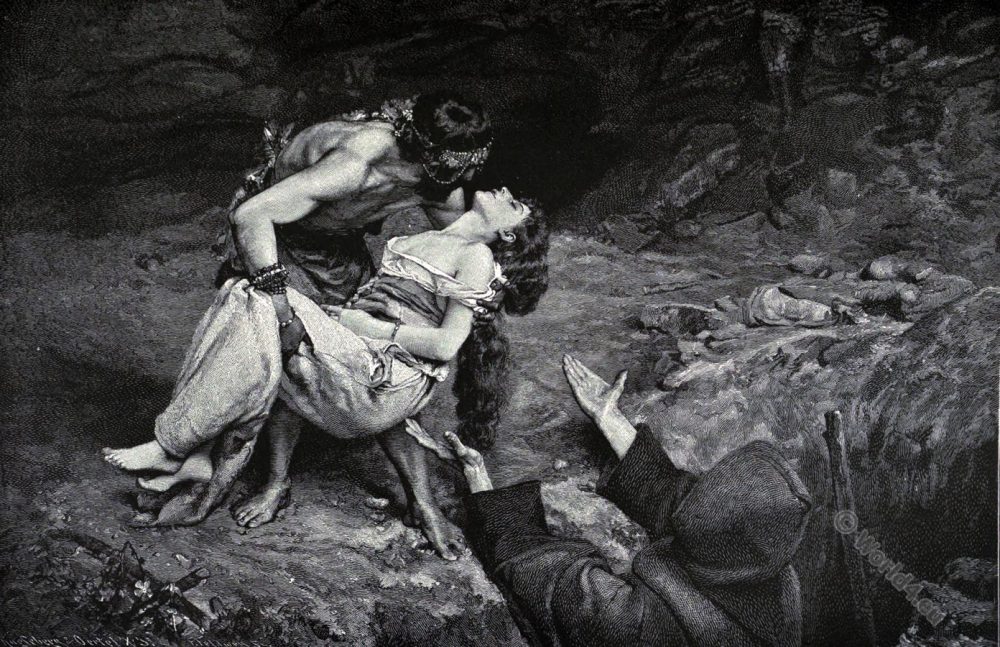 The Burial of Atala.

The Burial of Atala.

ATALA, the daughter of a white man and a Cristianized Indian, takes an oath of virginity, but subsequently falling in love with Chaclas, a young Indian, she poisons herself for fear that she might be tempted to break her oath. The story of her burial is told by her lover.

“Towards evening we bore the precious remains to one of the openings of the grotto that faced the north. The hermit had swathed the body in a piece of European linen Spun by his mother. It was the only possession from his home that be had retained. … Atala was laid on a plot of mountain sensitive plants; her feet, her head, her shoulders and a part of her bosom were uncovered. In her hair was a faded magnolia blossom. Her beautiful eyes were closed, her modest feet were joined, and her alabaster bands pressed to her heart an ebony crucifix: the scapulary of her vows was about her neck ….
I bore the body upon my shoulders; the hermit walked before me. At last we reached the spot my sorrow had chosen, and we laid the beautiful one in her bed of clay.”

Atala is a romantic novel by François-René de Chateaubriand from 1801. Atala is the story of a young half-Indian. She falls into a conflict between her love and the chastity that she has praised her pious mother and kills herself.

Atala is one of the most historically important works of French Romanticism and encompasses essential aspects of this literary movement: exotism, passion and pathos, Catholicism.

François-René, Vicomte de Chateaubriand (1768-1848) was a French writer, politician and diplomat. He is considered one of the founders of the literary romanticism in France.