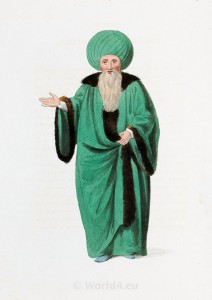 The Chief of the Ulemas.

The Chief of the Ulemas. Scholar of Islamic Law and other disciplines.

ALL, who make the law a profession in Turkey, are distinguished, at least when they have any office, by the largeness of their turbans. There are regular gradations, by which they must rise; and no one can hold a place of any importance, unless he has first filled an inferior office. They must first have been Sohtas, or students; then Muderris, or chief of a college; after this they become Naibs, or clerks to some Cadi or judge; then Cadis; Mollohs, or superior judges, is the next step. Of these there are various ranks, till they may become judge of Mecca. They then have a right to be Istambol Effendissi, or chief officer of the police in Constantinople, and last of all arrive at the grand dignity of Kadiaskar, or superior judge of Europe and Asia.
It is not, however, to be imagined but that these different degrees are frequently passed over by those who possess either rank, power, or interest. And, indeed, there are some particular families, who almost assume a right, by a kind of inheritance, or patrimony, to some of these high dignities. The Sultan can appoint them directly; but even then the forms are so far complied with, that the person receives the commissions for all the inferior offices at the same time that he does for the superior. This, however, sometimes causes great murmurs among the Ulemas, or professors of the law.