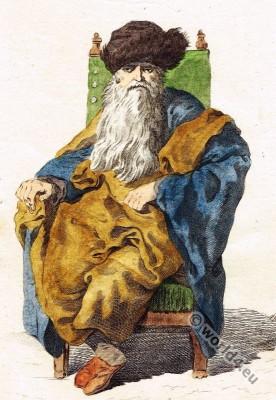 Sclaveni is the name given to the various Slavic communities on the southwestern branch or on the borders of the Byzantine Empire, the lower Danube, Wallachia and Moldavia, which had formed in the early 7th century. Later this term was also used to denote the Slavs dominated and populated regions in the Byzantine territories in the Balkans. With their “land grab” in Greece sealed the Slavs there to 600 the end of antiquity.

The depicted costume exhibits the influence of the Ottoman Empire in 18th century.