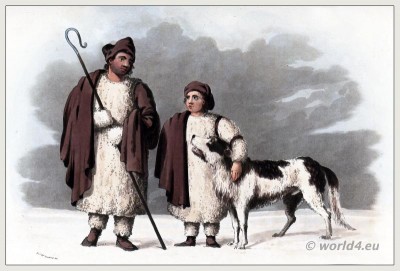 SHEPHERDS OF THE PLAINS OF LEON

SHEPHERDS OF THE PLAINS OF LEON, In their Winter Clothing.

THE dress of the Shepherds here represented, is only worn during the severest days of winter. It consists of a sort of sheepskin armour, with the woolly side outwards, over which is thrown a great coat or capa.
Thus prepared against inclement weather, the Shepherds are never absent from their flocks, during their winter excursions through the plains, and are always attended by dogs of a peculiarly fine breed, remarkable for their good nature as well as courage. In right of the privileges of the Mesta, (a chartered society of great flock owners, to which the law has granted considerable privileges of pasturage,) the migratory flocks commence their journey about the beginning of November, when the scanty herbage, and cold air of the mountains, render a change of place and climate necessary.
The two Castilles, Leon, and Estremadura, are the provinces which have suffered most in their agricultural interests by these annual incursions.
It has been urged by some who profit by this unequal law, that the delicate quality of the Spanish wool is acquired by this change of food and climate, an opinion, wholly refuted by well attested experiments, which prove that the wool of the stationary flocks of Estremadura, is in no degree inferior.