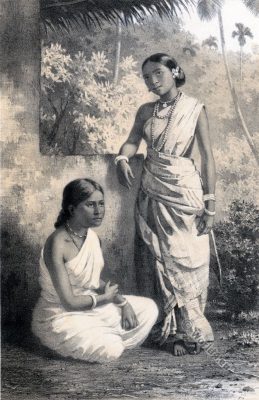 A very industrious part of the population in Ceylon consists of Tamils or Malabars, who have gradually immigrated from the continent to the north of the island. The plate exhibits the portraits of two malabar girls in their pretty costume, formed of one single shawl, and bearing upon their persons bracelets, chains, nose- and ear-rings.

Malabar (Malayalam, Malabar) is a region in India. Originally designated the entire Malabar region of today’s state of Kerala on the southwest coast of India. Today among the region Malaba is understood only the northern part of Kerala. Whereby the Malabar coast called the whole stretch of coastline between Cape Comorin and Mangalore.