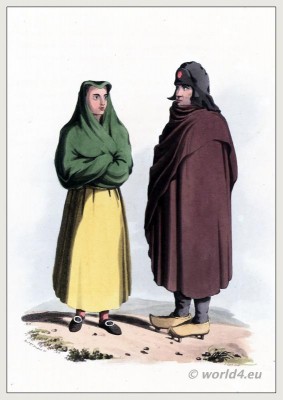 PEASANTS OF THE CORREGIMIENTO OF TORO.

PEASANTS OF THE CORREGIMIENTO OF TORO.

BETWEEN Salamanca and Toro, a variation in dress, and a difference in external character is apparent, which produce a comparison by no means favourable to the peasantry of the latter district.

These people are as remarkable for the filthiness of their person and correspondent negligence of dress, as those of Salamanca for the neatness displayed in both; and are no less distinguished for their sullenness and slothful habits, than the others for their sprightliness and activity.
A Montero cap is usually worn by the male peasants in this part of the plains, and a gown brought over the head of the women supplies the place of the mantilla. Wooden shoes are worn by people of both sexes, during the winter.