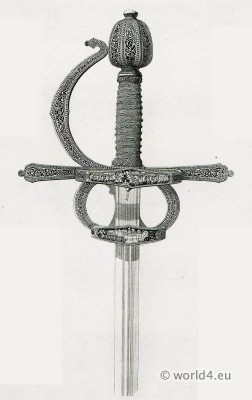 “Headmost of offensive arms, as Mr. Paul de Saint Victor hat it, shines the sword, the noblest of all, a symbol of might and command. In every time, was it not, so to say, a part of the warrior ?
The one is not more imagined without the other than a lion without claws, or an eagle without talons. In the middle ages, the sword is spoken of as a living, and was baptized as a christian creature.“
The sword is the only arm of antiquity wich we have retained; but ist seems, as many other warlike implements, drawing near to its end. Nowadays it is considered as little more than the sign of authority. The needle gun, a precursor of still more formidable weapons, is destined to drive out sword, cuirass and helmet. In a manner, the sword is to become an object of art or archæology, curios to study for the important part it performed in the great drama of the anterior civilisation: let it be so!

The arm, wich we show today, belongs to Mr. D’Armaillé, and it may looked on as one of the finest ever executed. It hears the date of 1555 and is in a perfect state of preservation.
The subject on the guard is the Rapt of Helena, and the lower one shows the city of Troie. The nielloes are of gold on a black ground, with the exception of the rows of small pearls which mark and follow the cotours, and they are of silver.

Note:  Knight of the Order of The Elephant 16th century.