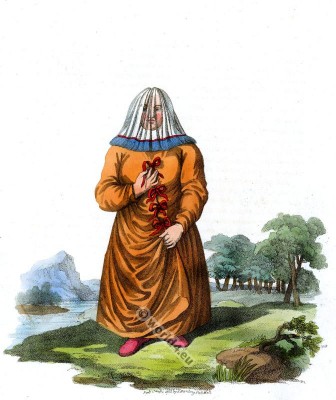 Traditional dress of a female Ostyak, 1803.

THE Ostyak women, treated like slaves by their husbands, are employed in drying fish, extracting oil, and manufacturing soap. Their dress strongly resembles that of the men, and is only distinguished by the head-dress.  Among all the people of whom we have had occasion to speak, we have remarked that the females, habited in other respects like the men, nevertheless distinguish themselves by a more costly head-dress; so natural is it for the sex to be pleased with showy decorations, and to load themselves with ornaments which too often disfigure them ! ‘The Ostyak women wear a cap, the extremity of which hangs down between the shoulders, and is decorated with fringe. They divide the hair into two braids, to each of which are attached narrow fillets of leather or cloth, which descend the back. These fillets are adorned with fringe, small pieces of money, counters, glass beads, and plates of brass cut in the shape of flowers and animals.
It is unnecessary to repeat that poligamy is permitted amongst the Ostyaks, since it is so with all the nations of which we have spoken, as well as with those of which we shall hereafter have occasion to speak. They purchase their wives, and pay for them according to their means ; but every woman brings her husband some dowry. Before a wife can be obtained, the sum to be paid must be first agreed on, and as soon as a part of it is laid down, the bride may be taken home, but the nuptials cannot be celebrated till the whole of the purchase money is deposited. The bridal festival takes place at the house of the bridegroom.
The Ostyaks bury their dead on the day of their decease. The body is drawn to the grave by a rein-deer, which is afterwards sacrificed and eaten in honour of their departed friend. The corpse of the richer sort is followed by three empty sledges, drawn by rein-deer, which are also immolated, and the sledges left reversed over the grave. The apotheosis, common with the Greeks and Romans, is also to be discovered amongst the Ostyaks. They reverence, as inferior divinities, after death, those whom they esteemed while living. The puppet which represents their deceased relative hold its rank with their other idols. The Ostyak widows dedicate similar puppets to the memory of their departed husbands ; they even take them to their beds, and at their different meals do not fail to offer them a portion of their provisions.