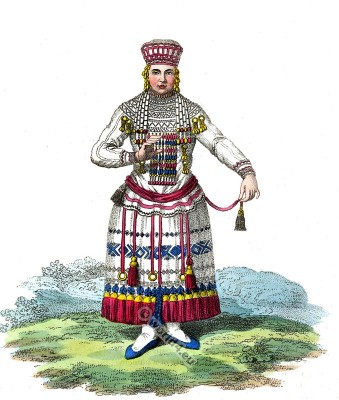 Woman of the Moksha Tribe in traditional Mordavia folk dress.

THE head-dress of the females of the Mokchanien tribe is less costly than that of the Erzianian, and has no other ornament than a little embroidery. Two narrow fillets are fastened to it, which descend the bosom, are ornamented with small silver coins, and terminate in little chains of the same metal. To the clasp which fastens the tunic round the bosom is added a large escutcheon, or breast-piece, to which are appended several rows of coral. Glass beads of various colours serve them for necklaces: the apron is formed of four fillets or bands, which are united by small clasps, trimmed with tassels, and loaded with coral. The females advanced in years wrap linen round the head instead of a cap, and the hair either hangs loose down the back, or is fastened in tresses. (See Plate XIV, which represents AN OLD WOMAN OF THE MOKCHANIEN TRIBE.)
Anxious to profit by the labours of their daughters-in-law, the Mordvins frequently dispose of their children before they are marriageable, and some-times even promise them in their infancy. This agreement is made by an exchange of pipes. The girl, thus betrothed without her knowledge, is not bound by this rash engagement, but the young man cannot bestow himself on another, without paying a certain forfeit. It is very rare for a Mordvin to have several wives at a time; but when he has lost one, he readily marries her nearest relation.
The sum usually given for a wife is about fifty livres. When the bargain. is made, and a short time previous to the day fixed for the marriage, the father of the young man repairs to the house of the future bride, who is presented to him by her relations. Bread and salt are offered him in token of hospitality. After a short stay, he carries, or rather forces, his daughter-in-law away with him, who is covered with a veil, and bemoans the loss of her liberty. On his return home he places her at table, still veiled, beside his son. A large cake is then served up; the father cuts a slice, and, passing it under the veil of the young bride, he lifts it up, and says to her, ” Behold the light, be happy, and become the mother of a numerous progeny.” The young couple view each other for the first time, and from that moment are married. The company make merry, drink, sing, and dance to the sound of music; while the young couple, who probably conceive a reciprocal disgust for each other at first sight, are often plunged into the deepest misery.