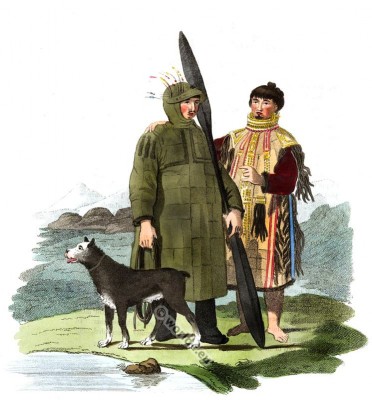 A Man and Woman of Unalaska, one of the Aleutian Islands.

(Unalaska is an island in the Fox Islands in the middle of the Aleutian Islands, south-west of Alaska in the United States. The Aleutian or Unangan live on the island of Unalaska for thousands of years.)

THE first and most western of these islands is that in which Bering, after a most disastrous navigation, was compelled to seek an asylum in 1741, and in which he afterwards died. It has preserved the name of this unfortunate commodore.

This island, which was at first only renowned for the melancholy fate of this estimable navigator, and the brave companions of his enterprize, supported a few of those animals much sought after for the value of their furs. The Russians were first invited thither by the thirst of interest, and the same motive induced them, shortly after, to go in search of the Copper Islands: at length, in 1745, they first explored the group of islands to which they have given the appellation of Aleutian. Bering’s Island, the Copper Island, together. with the Aleutians, appear formerly to have formed part of Kamchatka. Their inhabitants are the descendants of those who, in the time of the revolution, escaped the common disaster. They have a tradition among them, that their ancestors inhabited these same islands; and, it is certain that, before the arrival of the Russians, they had no knowledge of any other country.

The Eastern Islands produce neither fruit nor grain; and, destitute of forests, they maintain no kind of wild fowl: but, notwithstanding this, the inhabitants rarely experience a scarcity of provisions. Foxes, birds of prey, the flesh of whales, sea calves, &c. fishes thrown up by the tide, wild herbs and roots, all serve for the nourishment and support of’ these hardy islanders.

Their huts are dug under ground, at the depth of a fathom and a half: They rarely make a fire in these subterraneous dwellings; notwithstanding which, the heat is almost insupportable. In several of the Aleutian Islands the inhabitants never light any fire; in others, they burn, during the most severe seasons, the dried herbs which they have collected in the summer. In these gloomy caverns fifty persons at least are generally assembled, and sometimes two or three hundred.

Source: Costume of the Russian empire by Edward Harding.