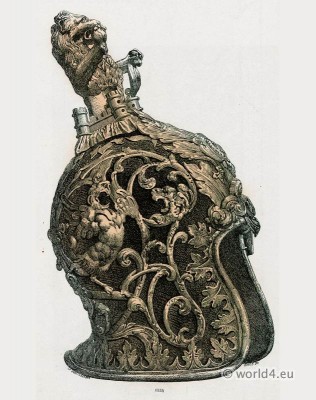 This fine show, or state-helmet has a Venetian orign and was a part of the fine collection of arms of emperor Napoleon III. Its general shape is that of the Italian sallets in the XVth. century. The crest, showing the Venice lion springing out of a fortress, and the ornaments in the form of foliages, are in gilt bronze, from a full cast. The whole ornamentation, of a very decorative effect, is put upon a ground of red velvet and ornaments stands a shell of polished steel. No withour hesitation do we give to this caque the date of the ≈√⁄th century; on might perhaps bring it back up the end of the XVth., considering, the forward state of the Italian art at this epoch. Be it as it may, it is a fine work and of a grand style, wich it is possible to produce again, tha is true, but wich may still become a teaching to many a sculptor and historical painter.

To the gilt ornaments cut more value is given from this calculated opposition, and they moeover contribute to give the richness and eclat wich are the chief meri of the object.