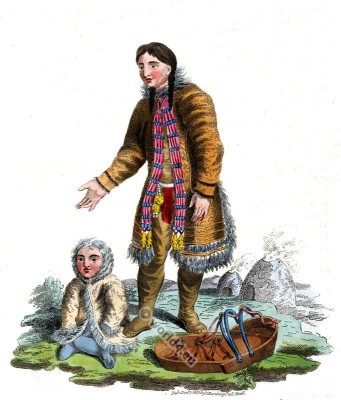 A Female Samoyed in her Summer Dress.

A Female Samoyed in her Summer Dress 1803.

ALTHOUGH the Samoyedes are permitted to marry as many wives as they are able to maintain, the greater part of them are contented with one. The price, of a wife is from five to fifteen rein-deer. The poor lover, who is unable to raise the purchase-money, is either condemned to celibacy, or under the dire necessity of taking to himself a spouse from among the females whom no one, with money, will condescend to bargain for. The Samopedes hold incest in the utmost abhorrence, and on no account will they marry a relation even in the most distant degree. They seldom choose a wife from among their own tribe. When the purchase-money is deposited, the bride is tied upon a sledge, and drawn to her husband’s habitation. The lover is generally obliged to carry her off by force; so great is her reluctance to follow him! The nuptial ceremonies are similar to those in use among the Ostiaks.
The Samoyedes treat their wives with contempt, and often with the most inhuman barbarity. The married women are more exposed to these cruelties than the single ; it is, therefore, natural to conclude, that the repugnance of the latter to matrimony does not, altogether, arise from affectation. As long as the wife continues to bear children, some degree of respect may be hoped for, but in proportion as she advances in years, these attentions disappear. The women are never allowed to eat with their husbands, and are obliged to be contented with the remnants of his table. In the hut a corner is appropriated to them, from which they dare not stir; and as the Samoyedes attribute a certain degree of sanctity to the fire, they are forbidden to approach, for fear of profaning it.
If the Samoyedes can be said to follow any religion, it is Shamanism. A few puppets, or figured stones intended to represent idols, are the only signs of an exterior worship. They neglect their divinities, and bestow all their attention on their priests or sorcerers, whom they call Tabid.
Their dead are not suffered to be carried out by the door, but are let through an aperture, which is purposely made on one side of the hut. They are dressed in their best clothes, wrapped up in rein-deer skins, and interred in a small shallow grave, which the Samoyedes, nevertheless, find extremely difficult to dig, from their want of proper tools, and the resistance of the frozen ground. On this account, in winter, they frequently bury their dead in the snow.

Nenets are indigenous people in northern arctic Russia also known as Samoyeds. They living in the Yamalo-Nenets Autonomous Okrug.