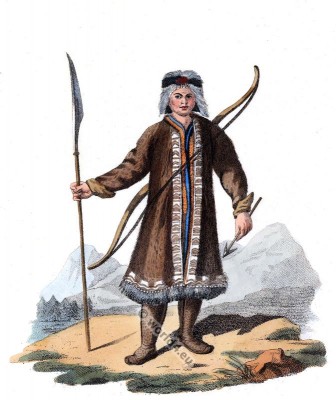 A Yakut in his Hunting Dress.

Yakut in hunting costume 1803. Costume of the Russian empire.

Back Figure of a Yakut, Sakha in his Hunting Dress 1803.

THE Yakuti call themselves Zokha or Socha. They formerly occupied the upper part oldie river Lena; but, oppressed and persecuted by the Mongols, they followed the course of that river, and descended lower down, till they reached the rigorous climate which they now inhabit. They extend on both sides of the Lena, from Vitym to the mouths of that river, and even to the borders of the Frozen Ocean; some of their tribes are still to be met with, towards the eastern extremity of Siberia, on the coasts of the gulph of Pinjinzk, and the shores of the Kolyma In general, their climate is severe; in some places the soil is rocky, and in others marshy, but it is every where incapable of cultivation, and unfavourable to the progress of population.
The Yakuti are of the middling stature. In their features and manners they resemble both the Mongols and Tartars. Their language has a stronger affinity to the latter; notwithstanding which, it is easy, from a number of expressions, to discover that they are no strangers to the Mongols, and that, formerly, they were in habits of intercourse with the Tongusians The Yakuti are rather flat-nosed, with small eyes, thin brown hair, and light beards. They have no great extent of capacity, but sufficient for their necessities and mode of living. Incapable of a strong degree of attention to any one object, arising more from indifference than idleness, they possess that indolence which moderate desires naturally inspire. Plain, but not rude, in their ordinary intercourse with each other, they possess that politeness which nature bestows, which art cannot teach, and which true benevolence can alone dictate.

Note:  Peasant girl of the village of Kieg island, Arkhangelsk.

The Yakuti form a numerous people, and are divided into tribes and districts. About the middle of the last century, their population was estimated at thirty-five thousand souls; but from the want of correctness in the registers, it may fairly be presumed, that they amounted to triple that number, and that the state of peace which they have enjoyed since that period must have considerably increased their population.
The Yakuti are hunters, pastors, and fishermen: their soil, which is every where unfriendly to cultivation, will never permit them to rise above those primitive occupations of man. Where the chase is unfavourable they are more successful in their fisheries, and the districts that leave unrewarded the fatigues of the hunter and fisherman, generally prove friendly to the vigilance of the pastor.