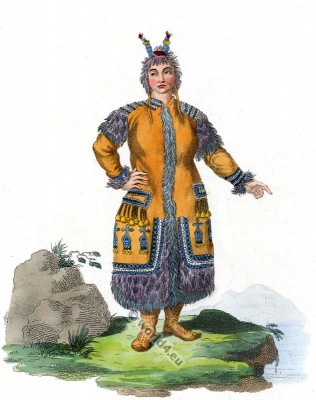 Back figure of a Yakutan Girl.

SHAMANISM is the only religion known to the Yakuti. They acknowledge two superior beings; both of them nearly equal in power, the one good, and the other bad. Inferior deities, emanating from their substance, participate also of their qualities. They marry, and have children of both sexes; who, in their turn, produce other divinities, inhabiting the air, the earth, and the waters.
The Yakuti have a number of idols. These idols are shaped and dressed up like children’s dolls; the eyes are imitated with glass or coral beads. They rub their deities all over with grease or blood, and smoke them over their fires, by which means their appearance is rendered extremely disgusting. Their priests are called Aiouns. In their prayers, they beseech the divinities that their troops may be numerous, and their game plentiful. Their most solemn festival is celebrated in the month of June. Each family collects together as much milk as their mares will afford them, which is thrown into a state of fermentation. Every person arrays himself in his best apparel. A young child about twelve years old is dressed up, and the Aioun or priest, is sent for. On his arrival, he advances to the middle of the hut, his face turned towards the east, and holding in his left hand a vessel filled with milk, and in his right hand a spoon. The child falls down upon one knee before him. The Aioun bows several times, calls upon the deities by their respective names, and at each name he throws into the air a spoonful of’ the milk, as an offering to the deity he invokes. Ile then prostrates himself afresh; after which he leaves the hut, pronouncing a few words in a low tone of’ voice. The company follow and seat themselves around him. Ile devoutly drinks several spoons-full of the milk, and returns the vessel to the child, who receives it, still kneeling, drinks in his turn, and afterwards presents it to each of the company. The vessel again returns to the priest, and is again handed to the child, and by him to the spectators. This ceremony, which is the most important part of the festival, continues till the vessels are all emptied; for they make it a rule never to depart while the least drop of the milk. remains.