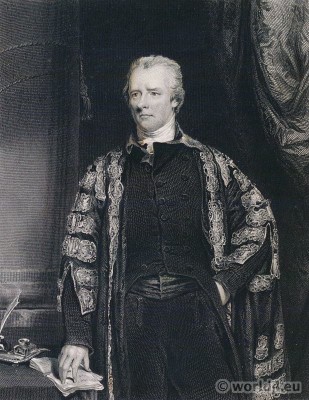 William Pitt the Younger (1759-1806) was twice Prime Minister of Great Britain. The second son of William Pitt the Elder began as a 14-year-old to study in Cambridge. Here he met William Wilberforce, with whom he formed a lifelong friendship. On April 2, 1792 went in Parliament in a long debate about the prohibition of the slave trade. Although already exhausted – it was April 3 as five clock in the morning – Pitt held the best speech of his career. He analyzed all the arguments of his opponents, without losing the thread. He implored the house – immediately and without delay – to regard Africans as human beings again. Towards the end of his speech he quoted slightly modified from the Georgics of Virgil: Nos primus equis oriens afflavit anhelis; illic sera rubens accendit lumina vesper. (We are the beginning (day) was hold with (his) snorting horses first; there (but) the inflamed reddish evening late the lights.) At these words, the first rays of sun had appeared in the House behind the speaker, it was said (not sure guaranteed).
The excesses of the French Revolution made Pitt more conservative. The Convention in Paris declared him an “enemy of the human race”. The news of the battle of Austerlitz gave him the death blow. He died on 23 January 1806.