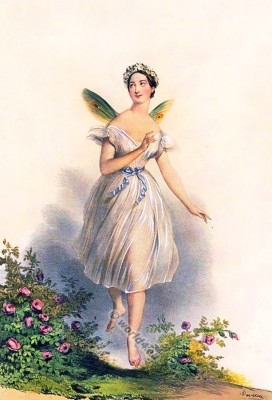 The ballerina Marie Taglioni dancing the Flore in the ballet ‘Zephyr et Flore‘.

The ballet dancer, ballerina Marie Taglioni as Flore in her London debut 1830. A Sylphide in the ballet ‘Zephyr et Flore’ by Charles-Louis Didelot.
Marie Taglioni was the first star of the romantic ballet. It is considered the first master of the tip dance. Her international career began when she appeared in 1832 at the Paris Opera Ballet in the La Sylphide by Jean Schneitzhoeffer. The choreographer of the piece was her father, Filippo Taglioni.