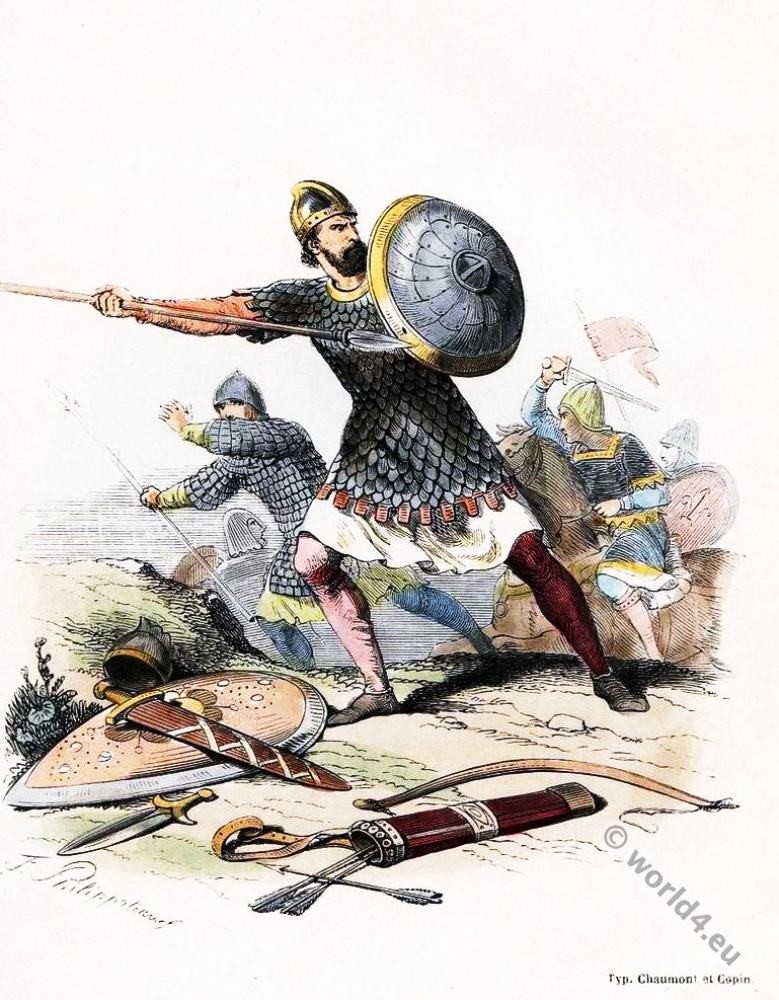 The brigandine offered good protection against arrows and was cheaper than the hauberk or breastplate of iron. Mainly carried by infantrymen, archers and crossbow, it was used until the sixteenth century.

Body armour composed of iron rings or small thin iron plates, sewed upon canvas, linen, or leather, and covered over with similar materials, deriving its name from troops called brigans, an irregular sort of infantry of the thirteenth century, by whom they were first worn. When covered with white linen, cloth, or fustian, they were called “miller’s coats”; but persons of condition had them covered with silk velvet and cloth of gold. Archers and cross-bowmen are generally represented in these quilted coats or jackets. (Specimens are to be seen in the Tower and other collections.) “Lequel l’Estourmey vestit icelles brigandines …. en disant que cestoit une belle jaquette.” (Lit. Remiss. A.D. I456). Meyrick describes the one in his collection “as composed of a great number of rudely-shaped pieces of flat iron, quilted between two pieces of canvas, the exterior being of a sky blue colour, and the small cords which perform this operation are seen in straight and diagonal lines knotted together at their intersections outside.” Skelton has engraved a portion of it, showing the holes in the edge for lacing it down the front.
Grose observes that it is frequently confounded with the JACK, and sometimes with the HABERGEON; but see those words, and also JAZERANT. In Brander’s MS. (‘Inventory of Armour in the Royal Arsenals,’ 1546), were mentioned a variety of brigandines, some styled “complete,” having sleeves covered with crimson, or cloth of gold, others with blue satin, and some with long taces or skirts. “Of armis and of brigantayle, Stood nothing thanne upon batayle.” Gower MS., Soc. Arch.

Source: A cyclopedia of costume, or, dictionary of dress, including notices of contemporaneous fashions on the continent; a general chronological history of the costumes of the principal countries of Europe, from the commencement of the Christian era to the accession of George the Third, by Planch, James Robinson, 1796-1880″