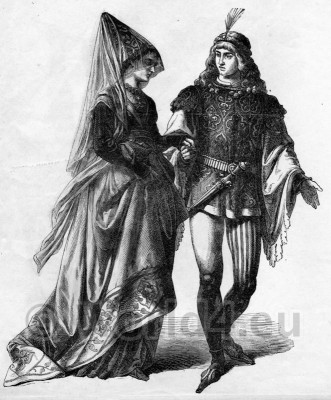 Fashion of nobility in 1450 in Germany of the late Middle Ages. The woman with a high Hennin and veil. The over robe (Surkot) is made of heavy damask, gold interwoven, with train, the hem of the dress is decorated with ornaments. The sleeves lengthwise slit. She wears a belt and pointed shoes. The emphasis on fashion, the cut of the clothes (Cotte and Muodor), cleavage is, in contrast to the medieval fashion is very physical, in the prominence of the female figure.
The man is wearing a skirt girded (Schecke, front opening dress), with high collar. The shoulders are padded. At the collar bells attached. The sleeves are short, stands out among the wide linen shirt. It is in the style of the Mi-parti held, a specialty of the Burgundian fashion. It was the garment consists of two halves influenced both by different colors of the color complex symbolism of the Middle Ages, or even by different types of interface. For instance, a long sleeve, the other short, as in this picture, where the left sleeve is ripped up and the linen shirt, with wide-cut sleeves, stands out. He wears a two-colored leggings, which are attached by cords to the skirt. With one leg up over the knee extends, the other end already under her skirt. He wears his hair long with a diadem adorned with a feather.