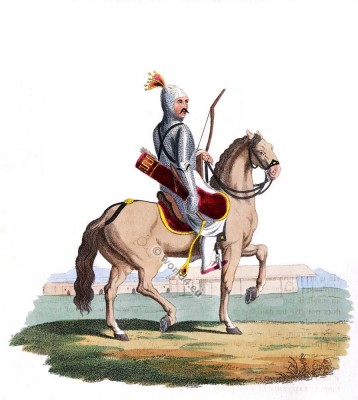 Circassian on horseback in complete armor

THE opposite engraving represents a Circassian on horseback, in his complete armour, a description of which has been given in the preceding Plate. The Circassian clergy and learned men let the beard grow to its utmost length; the former generally wear a deep red turban, and scarlet breeches, somewhat longer than those of the latter. Although the Circassians are ignorant, and only nominal Mahometans, yet the few priests among them are highly respected. The Princes and Knights pursue no other occupation than war, pillage, and the amusements of the chase; they live a lordly life, wander about, assemble in drinking parties, and undertake military excursions. The Usdens, or Knights, keep the lower classes of people in proper subordination, pay no duties to the Prince, but are obliged to render personal services in war.

In their amusements, the youth of both sexes freely converse with each other, as the Circassian women, in general, are neither confined nor reserved; yet in their courtships every attention is paid to the rank of the parties. No Usden dares to court the daughter of a Prince; and, if such an amour should ever take place, or the Princess be seduced by an Usden, the lover, on the first occasion, forfeits his life without mercy. When a young couple marry, they dare not present themselves before their parents during the first twelve-month, or till the birth of a child. During this period the husband continues secretly to visit his young wife through the window of the apartment. He is never present when she is visited by strangers. The husband is even displeased to hear others speak of his wife and children, and considers it as an insult if inquiries be made after the welfare of his spouse. The father does not give his daughter her full marriage-portion till after the birth of her first child ; on this occasion he pays her a visit, takes off the cap she wore when a virgin, and with his own hands covers her with a veil, which, from that period, becomes her constant head-dress. When the head of a family dies, the widow, in token of her grief, is obliged to scratch her face and breast till the blood issues. The men, on a similar event, strike their faces with a whip, in order to produce spots, which they exhibit, for a certain time, as expressive of their grief.