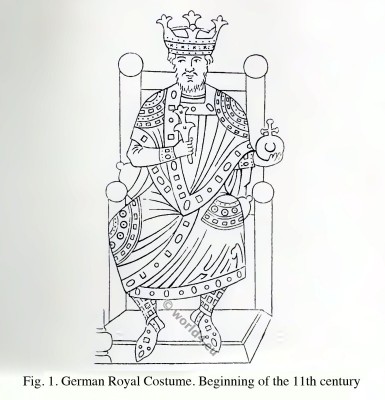 The robes with which the German kings were invested at their coronation in Aachen (Aix-la-Chapelle), and from 1711 onward in Frankfort-on-the-Main, and which, together with crown, sceptre, and orb, etc., composed the Imperial regalia (Fig. 1.), are as follows:

(1) The dalmatica (Fig. 2.), a magnificent under-garment of violet colored material, closed all round and reaching to the knees. The neck has a border of braid, and can be made lower by means of a gold cord that passes round it. The sleeves are long, and cut very narrow in front; they are embroidered with leaf devices in gold and pearls. The hem has similar ornamentation. 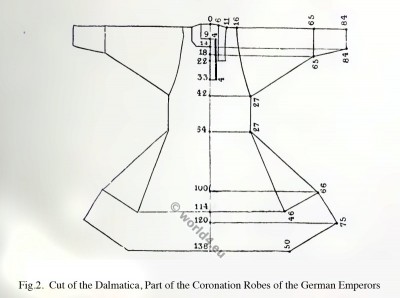 (2) The alba (Fig. 3.), worn over the dalmatica. It takes its name from its color. It is of white silk material, a kind of thick taffeta of good quality. It is like a chorister’s surplice, and very wide at the foot. The sleeves are slightly pointed, and ornamented with broad stripes of gold and pearls on the shoulders, at the wrists, and in front at the neck, where there are two gold cords. At the foot is a very wide hem divided into five horizontal stripes. The first and fourth of these stripes have various lines, which look like moire. In the second and the lowest of the stripes is a Latin inscription, and in the middle stripe (the broadest) there is ornamental embroidery. From the inscription it appears that this robe was made in Palermo in the year 1181, in the fifteenth year of the reign of William II, King of Sicily, the son of King William I. Presumably it came to be part of the German Imperial treasures through the Emperor Henry VI, who married an aunt of William II, or through Henry’s son, Frederick II, who had become heir to the kingdom of Sicily. 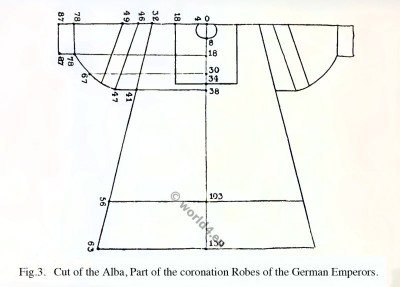 (3) The stola, a long, narrow strip of violet silk richly studded with pearls and precious stones. From both ends depend three long tassels of gold. The king who was to be crowned had this stola put round his neck over the alba in the vestry. It was crossed over the breast and fastened with a girdle.

(4) The pluviale, or pallium, is a mantle reaching to the feet, open in front, having at the top a golden clasp; it has a sash studded with stones and kept in place by a pin thrust through it. The mantle is made of red silk lined with taffeta. A tree-like decoration edged with diamonds divides it longitudinally into two halves. On each half is embroidered in pearls and gold a large lion, with a camel beneath it. The neck of the mantle is low, and has a hem of gold braid. The garment is so made that it has to be put on over the head. The braid, edged with stones and pearls, goes round the neck and down the front on both sides to the foot. In the angles formed by the braid at each side of the neck a rose is embroidered in small stones and surrounded by pearls. Along the foot of the mantle, between two double rows of pearls, an Arabic inscription is embroidered in gold lettering.
Probably this mantle was part of the spoil brought from the Holy Land by the Emperor Frederick I, or by his son Frederick, Duke of Swabia, afterward finding its way among the Sicilian royal treasures through the Emperor Henry VI, who in 1186 married Constantia, sister of William I, King of Sicily, and finally being added to the German treasures through the Emperor Frederick II, son of Henry VI. A large part of these treasures was lost in the year 1248, when the Parmese conquered the city of Vittoria.

(5) The gloves are knitted in purple silk and decorated with pearls and precious stones.
(6) The stockings are of red silk, with a fairly broad stripe braided with gold at the top.
(7) The shoes are of dull satin, cornelian red, and embroidered with gold and pearls. The soles, inside and out, are covered with red saffian.

(8) Two girdles, which were used to lift the robes from the ground. One is of spun silk, cornelian red, made like galloon braid, with lettering in gold thread. The ends of this girdle are decorated with lion-heads stamped out of sheet gold and with five gold buttons hanging from five triple strings. Each of the lions has a pearl in his maw. The other girdle is made of silver-gilt thread, and has a buckle of gold.