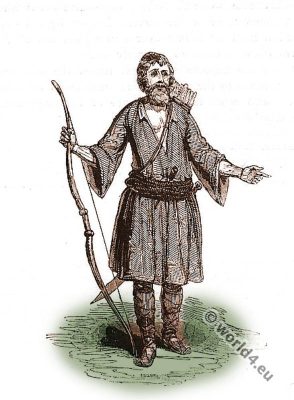 Fashions change but little in the east, and the dress of the Cretan peasant is very interesting, even at the present day, from its resemblance to that worn by his ancestors more than two thousand years ago. If we view the Cretan costume in the sixteenth century, we shall find that it still more closely resembles that of the ancient inhabitants of the island. In the engraving on the previous page we notice that the beard, the bow and quiver, the sword and long knife, were all preserved.

The tunica or shirt, according as we give the garment its Hellenic, its Roman, or its English name, was still exposed in all its amplitude to the eye: and Galen’s description of the boots, worn by the Cretans of his time, is a sufficiently accurate account, both of those described by Foscarini, and of those which I find still preserving their ancient form and name, and alone worn by the rural population in every part of the island. 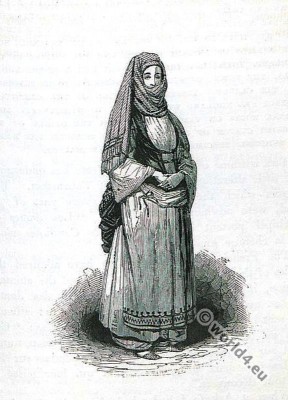 Not only was the bow common in the 16th century, but wounds from arrows are frequently mentioned in the details of the siege of Candia, which took place only a hundred and fifty-five years ago. In speaking of the Sfakians, Foscarini says (in 1596), that they always carried their bow and quiver, and were most excellent archers: “Vanno sempre con ľ arco sulle spalle et al fianco con un carcasso pieno di frezze, tirade da loro ecccllentissimamente, come molti anco sono eccellentissimi archibusieri.” Garzoni also mentions the difficulties encountered by the Venetians when they attempted to replace the ancient bow by a modern innovation. 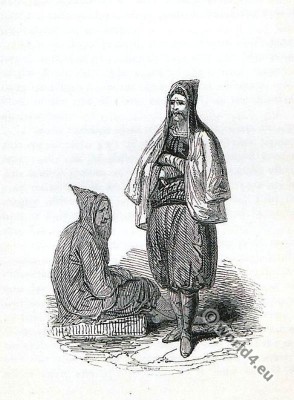 Cretans in their cloaks

Another article of dress sometimes used by the Cretans is a very short cloak, falling only a little below the girdle. This I suppose to resemble the Kretikon, mentioned by Eupolis and Aristophanes, and stated by some lexicographers to have been a short light cloak, just as much as the modern boots resemble the ancient throughout in the island.
It is worthy of remark, that the Sfakian cloak agrees less than that of the other Cretans with the descriptions of the Kretikon. The cloak of these mountaineers is large and heavy, and is of its natural whiteness, while those of the rest of Crete are dyed, as the Kretikon used to be.

It is the Sfakians alone who wear their cloaks through any considerable part of the year: the other Cretans only make use of them a little in the winter months. The ancient Cretan seems to have worn his cloak all the year round, just as the modern Albanian puts on his shaggy white capote to defend himself as well from the heat of July and August, as from the cold of December and January.

Little as is the change which has taken place in the fashion of the Cretan’s dress, there is yet a considerable difference in its material in ancient times, and at the present day. Both the under and upper garments of the Dorians were woollen; and the same dress was adopted by the Athenians, and had become general in the time of Thucydides. Thus the linen kiton or shirt, among the ancients, was thought a luxury: and yet at the present day the Sfakian mountaineer frequently wears a silken shirt, although probably it is only washed for Easter Sunday during the whole time while it is in use.
It is occasionally taken off’, like that of an Albanian, in order that its owner may free him from some of those active little animals which have long enjoyed an undisturbed shelter within its hospitable folds.