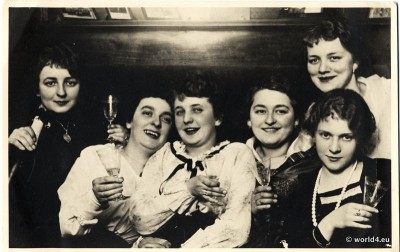 A historic recording of a private group of young women at a party. The time falls within the so-called Roaring Twenties in Berlin. A beautiful contemporary document which also affects the hair, fashion and costumes of the drinking girls. The meeting place was in the Grosse Hamburger street in Berlin.
The Grosse Hamburger street in Berlin’s Mitte district close to Hackescher Markt, Rosa-Luxemburg Platz. It contained the oldest Jewish cemetery in Berlin. The Jewish synagogue in the Oranienburger Street was a stone’s throw away. This shows more of the old part of Berlin in the form of small, narrow houses are situated between the tenements. Originally called the barn area, as the Great Elector Friedrich Wilhelm, 1670, settled the barns outside the city walls of Berlin in order to reduce the fire hazard. From about 1700 the Jewish population was located in this district. By 1900 the district was one of the most densely populated city of Berlin. Mostly Jewish immigrants from Eastern Europe settled there because of new job opportunities in the wake of industrialization.

The inhabitants lived in painful confinement. Today it is a very popular nightlife district and is part of the standard offer of a guided tour of historic Berlin.