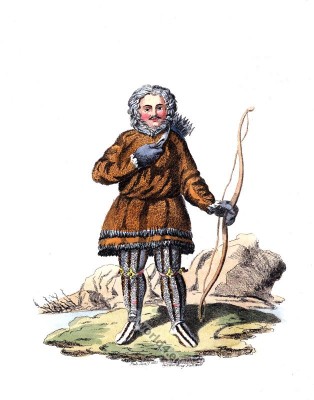 THE tribes of Samoyedes wandering on this side the Yougoric mountains have long been known to the Russians. It is proved that, about the year 1525, they submitted to that illustrious prince, Ivan Ivanovitch. They are scattered on the borders of the Frozen Ocean, from the banks of the Mezen, in Europe, as far as the banks of the Lena, to the north of Asia. They are no where to be met with on this side the sixty-fifth degree of latitude; but to the east of the Yenessey, they have taken refuge under the seventy-fifth degree, in solitudes even more northern than the greater part of Nova Zembla. A Samoyede is rarely more than five feet high.  Some, however, are to be found of the middling stature. They have all large heads; flat faces, small eyes, wide mouths, thin lips, long ears, a thick skin, a yellow complexion, and straight black hair. Their dress strongly resembles that of the Yakuti. Their winter garment is commonly of the skin of the rein-deer, or the fox, trimmed with dog, or wolf-skin, and sometimes. with the skins of birds in their plumage.

The Samoyedes, like every people who depend for subsistence upon the chace, are extremely sharp-sighted; their sense of hearing is also very delicate. They send forth the arrow with a steady hand, and rarely miss their object. These savages, actuated scarcely by any passion, live, as it were, without laws and without crimes. Content with what they possess, they envy not the prosperity of their neighbours, and robbery is unknown amongst- them. An anonymous writer, who has left us some particulars relative to this people, one day assembled several of them in his chamber, that he might examine them more narrowly : ” But,” says he, ” though I left upon my table money, fruits, strong liquors which I had given them to taste, and every thing that I conceived most calculated to tempt their cupidity; though I abandoned my chamber to their discretion, caused my domestics to withdraw, and retired myself into a corner, where I could see them unobserved, they never removed from their indifference, but remained seated on the ground with their legs crossed, without touching the most trivial article.

Nothing but the looking-glass called forth the smallest surprize; and in a moment after, even that excited no longer their attention.” Nothing can be made to rouse their curiosity; nothing can draw them from their state of indifference. Several of them have visited Petersburgh and Moscow, but, insensible to the beauties of those cities, and the ad-vantages they unite, they preferred their savage state of existence to all the conveniences of polished nations, they regretted their absence from their deserts; and hastened to return thither.

Nenets are indigenous people in northern arctic Russia also known as Samoyeds. They living in the Yamalo-Nenets Autonomous Okrug.