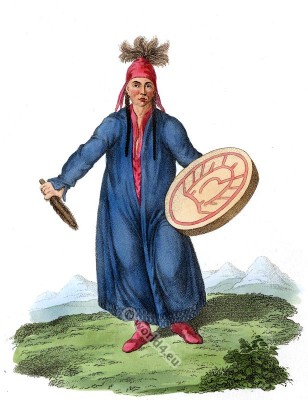 A Female Shaman, or Sorceress of Krasnojarsk.

A Female Shaman, or Sorceress (Magician) of Krasnojarsk.

Back of the costume

THE numerous Pagan nations inhabiting the Russian Empire are divided into three religious distinctions, viz. the followers of Shamanism, the disciples of Lama, and the sect of the Brahmins. Of these, Shamanism is, unquestionably, the most ancient; the Eastern world is acquainted with none of greater antiquity; it is, in fact, the origin and foundation of the worship of Lama, of the Brahmins, and also of several other Pagan sects. In India, some philosophers were to be reckoned among the number of its priests; its doctrines, however, could not be very systematic; but among the nations who people the Russian Empire it has undergone great alterations. Its partizans, unable to read or write, have, from time to time, introduced so many changes, that, in our days, it consists entirely of a tissue of idolatrous contradictions, absurdities, and the grossest superstitions.
Among all the Pagan nations professing Shamanism, the woman is regarded as a being much inferior to the man; but, notwithstanding this contempt for the female sex, their religion, nevertheless, admits of priestesses. They are as much respected as the priests, and an equal portion of supernatural power is attributed to them. These Pagans imagine that their priests and priestesses are called to the priesthood by the gods themselves; and whenever an infant is subject to cramps, convulsions, and other infirmities, they are considered as so many proofs of their religious vocation.
The Shamans, priests as well as priestesses, are taken from the common class of society, and are only distinguished from the rest by the singularity of their dress, and a more extensive acquaintance with the dogmas of their religion. The presents they accidentally receive, together with the sacrifices, form their sole support: but as this is rarely sufficient for their maintenance, they arc obliged, like their countrymen, to have recourse to fishing, hunting, &c. in order to provide themselves with a subsistence. As the priests arc the sole depositaries of the dogmas of their faith, they are considered as the mediators between the gods and the people, and as possessing the power of reconciling them with men.
In performing their delusions, they throw themselves into violent contortions, tremble, foam at the mouth, and fall down apparently deprived of all sensation. The frightful motion which they give to their eyes ends frequently in total blindness: but this circumstance serves to render them more respected; since it is conceived that this accident secures them a more familiar acquaintance with the world of spirits.