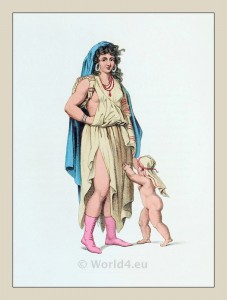 A female bedouin of the dessert, with her child. Ottoman Empire.

THIS may be considered as the companion of the last plate. The dress, though not elegant, is not uninteresting. The Arabian women of the desert wear a number of singular ornaments; large metal rings in the ears, others of the same kind upon the ancles and arms, pieces of coral hung about them, and also necklaces of all sorts. They sometimes even hang small bells to their hair, and the young girls fix them to their feet. And it is not an uncommon custom among the Bedouins, as with the more civilized Arabians, to puncture different parts of the body and insert a blue dye.