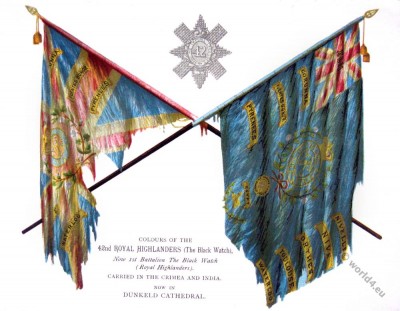 Flags of the Black Watch.

Flags of the Royal Highlanders. The Black Watch.

Colours of the 42nd Royal Highlanders (The Black Watch). Now 1st Battalion The Black Watch (Royal Highlanders). Carried in the Crimea and India. Now in Dunkeld Cathedral. Senior regiment of the Highland Brigade. Scottish infantry regiment of the British Army from 1881. The regimental motto was Nemo me impune lacessit (no one attacks me with impunity).  During the 2003 Iraq War the Black Watch fought in the attack on Basra and during its deployment the unit suffered a single fatality. The following year the Black Watch was dispatched to Iraq again, as part of 4 (Armoured) Brigade. (Source Wikipedia)

From the book: History of The Scottish Highlands, Highland Clans And Highland Regiments by William MacKenzie.