PLANS AND SECTION OF THE ROYAL CAVERNS, AND OF THE GROTTO OF JEREMIAH.

A. Present Wall of the City.
B. C. D. &c. – Positions corresponding with the different Levels of the Section. 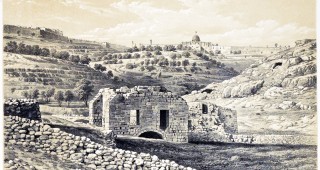 Jerusalem. South-eastern extremity of the Valley of Siloam.

Panorama of Jerusalem, seen from the Mount of Olives.

Mount of Olives and the Garden of Gethsemane at Jerusalem.

View of the Valley of Jehoshaphat, by Ermete Pierotti.

Note:  The Knights Templar. The Second Crusade in the Middle Ages.
Share