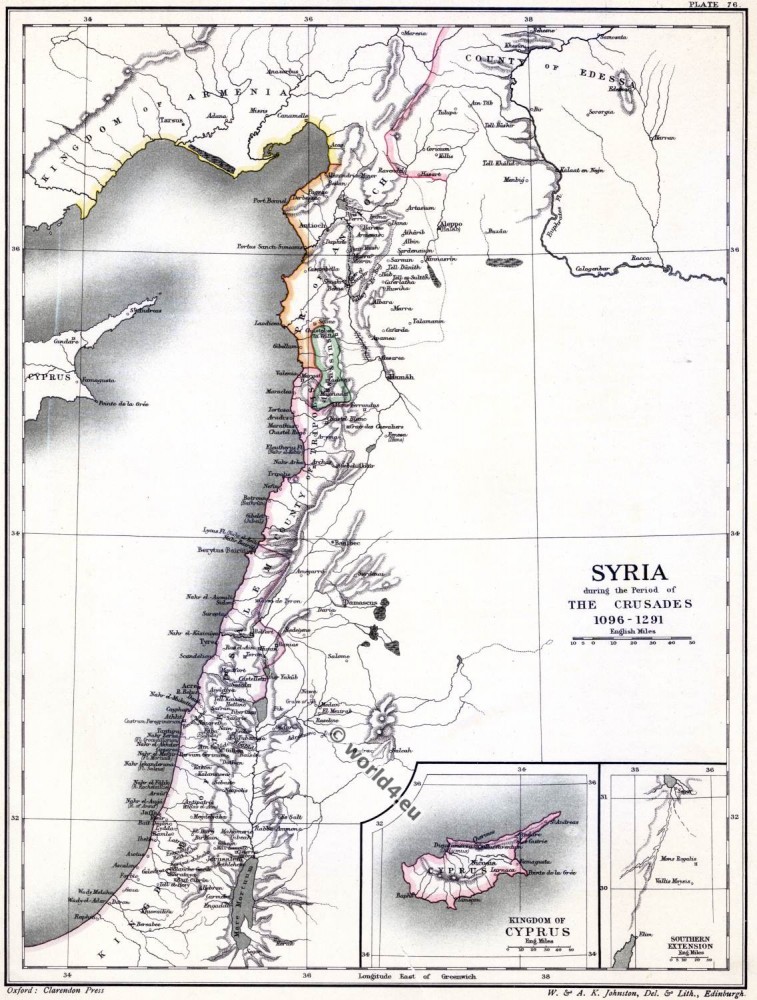 The principality of Antioch. The crusades.

OF the four leading states founded by the Crusaders in Syria, the principality of Antioch was the most northerly and the kingdom of Jerusalem the most southerly. The county of Tripoli lay between these two extremes, while to the northeast, on either side of the Euphrates, lay the county of Edessa. 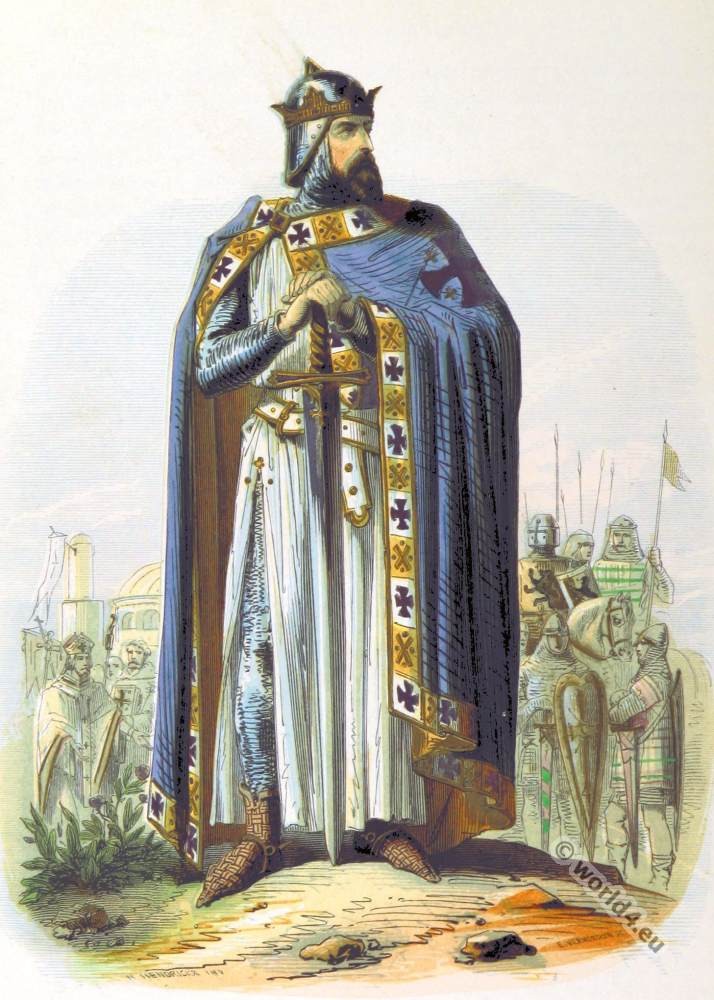 The county of Edessa

The county of Edessa, founded by Baldwin of Boulogne (1058-1118), the brother of Godfrey de Bouillon (French: Godefroy de Bouillon; also Godefroid de Bouillon; 1060-1100, after the conquest of Jerusalem, he became the first ruler of the newly established Kingdom of Jerusalem, but rejected the kingship.), dates from 1098. Originally it was not a fief of the kingdom of Jerusalem, since it was established before the taking of the Holy City. On Godfrey’s death Baldwin was elected king, and endowed his cousin Baldwin du Bourg with Edessa and its dependencies.
Thus Edessa became a vassal state to the kingdom of Jerusalem. On BALDWIN I’s death BALDWIN II became King of Jerusalem, and in his turn handed over Edessa to his kinsman Joscelin de Courtney, from whom it passed to his son Joscelin II. In 1144, at Christmas, the town of Edessa was taken by Imad ad-Din Zengi, and, though recaptured by Joscelin for a few months towards the end of 1146, almost immediately fell back into Muslim hands. The rest of the county, ‘ground’ (in William of Tyre’s words)’between the two millstones,’ Masud, Sultan of Iconium, towards the north, and the Atabegs of Aleppo and Mosil towards the south, was finally abandoned by the Crusaders in or about the year 1152. Nominally the deserted cities were handed over to the Greek Emperor, whose power however in these parts was very feeble, and they soon drifted into other lordship.

Kingdom of Armenia and the principality of Antioch.

The principality of Antioch

The principality of Antioch was founded by Bohemond I in 1098-99. From the earliest times it was a bone of contention between the Greek Emperors and the Kings of Jerusalem. Twice at least (1137 and 1142) did John Comnenus (Byzantine Emperor from 1118 to 1143) come south to enforce his claim; and once Manuel Comnenus, his son, led an army to Antioch for the same purpose. The principality extended northwards as far as the river Gaihun (Aras or Araxes River), and southwards to the river that flows ‘between Margat and Valenia,’ perhaps the modern Burğ es -Sabī, or, according to Ray, the modern Wady Mehica, where the county of Tripoli commenced. Eastward its boundaries were vague and fluctuating. In the twelfth century the Armenians began to show signs of activity in the neighbourhood of Cilicia, and conquered Tarsus from the Greeks for a time in 1132. At first they were more or less dependent on the Princes of Antioch; but at last, about the year II93, they established their independence and fixed the limits of their state, towards the south, at Portella. Leo of Armenia was now definitely set free from his homage to the Prince of Antioch, and in 1198 or 1199 was crowned King of Armenia by the Archbishop of Mentz acting in the name of the German Emperor. Baibars the Sultan of Egypt took Antioch, May 27, 1268, and immediately after this the Templars abandoned their two fortresses to the north of this city and ‘all the land of Port Bonnell at the entering in of Armenia.’ 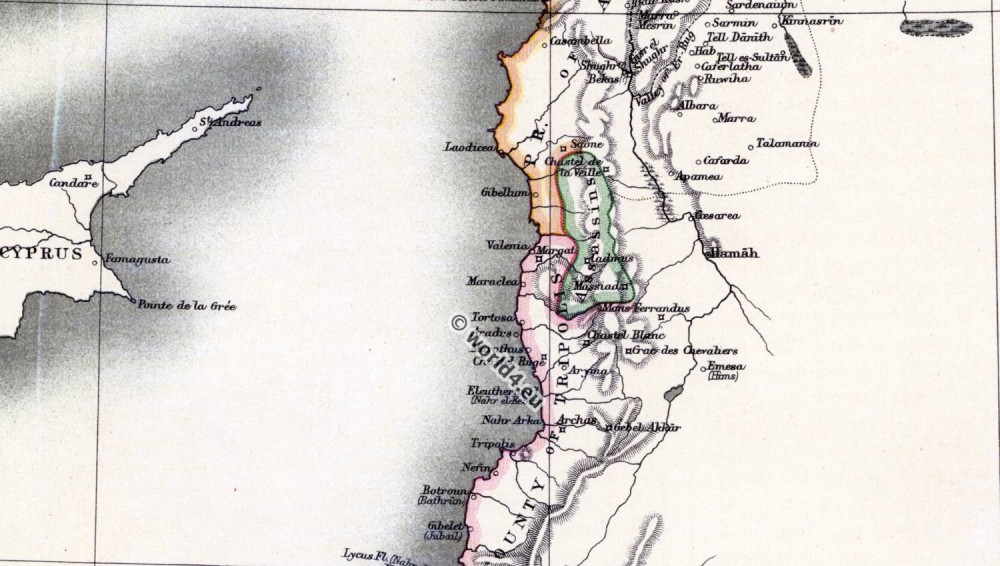 The county of Tripoli

Damascus. Syria during the period of the crusades. 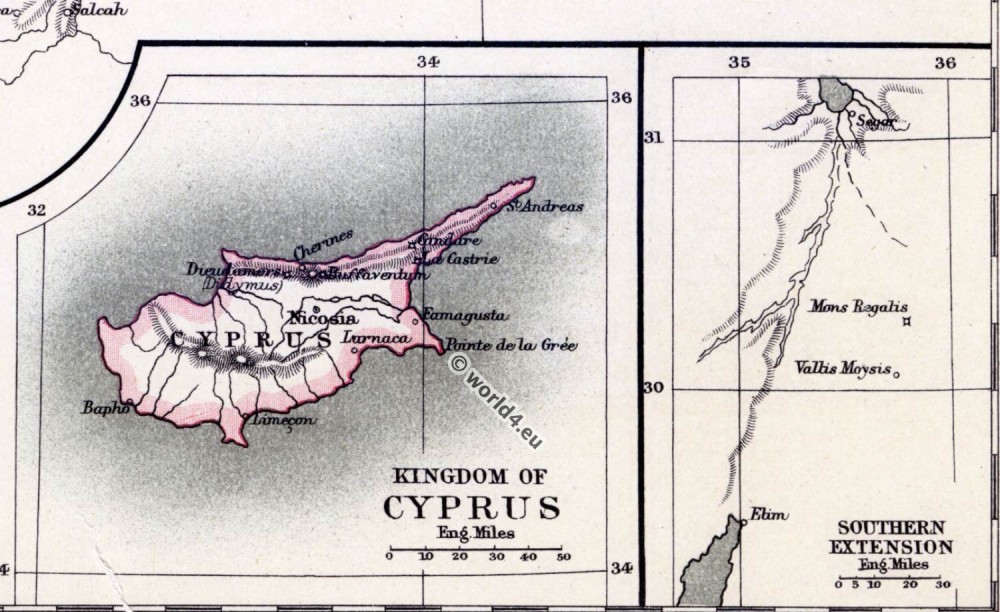 Kingdom of Cyprus. Syria during the period of the crusades.

The county of Tripoli

The county of Tripoli was bounded, on the north, by the principality of Antioch; and, on the south, by the Nahr Ibrahim, or Adonis. It was practically established by Raymond of St. Gilles (who died in 1105); but Tripoli itself was not taken till 1109. On its east lay the territories of the Assassins. Raymond III (otherwise known as Raymond II), dying in 1189 without issue, left his lordship to his godson Raymond, eldest son of Boamund III of Antioch.
After a somewhat confusing tangle of events the county of Tripoli and the principality of Antioch were both united in the person of Boamund IV (ob. 1232), and remained in the hands of his descendants till the final fall of both cities, Antioch in 1268 and Tripoli in 1289. 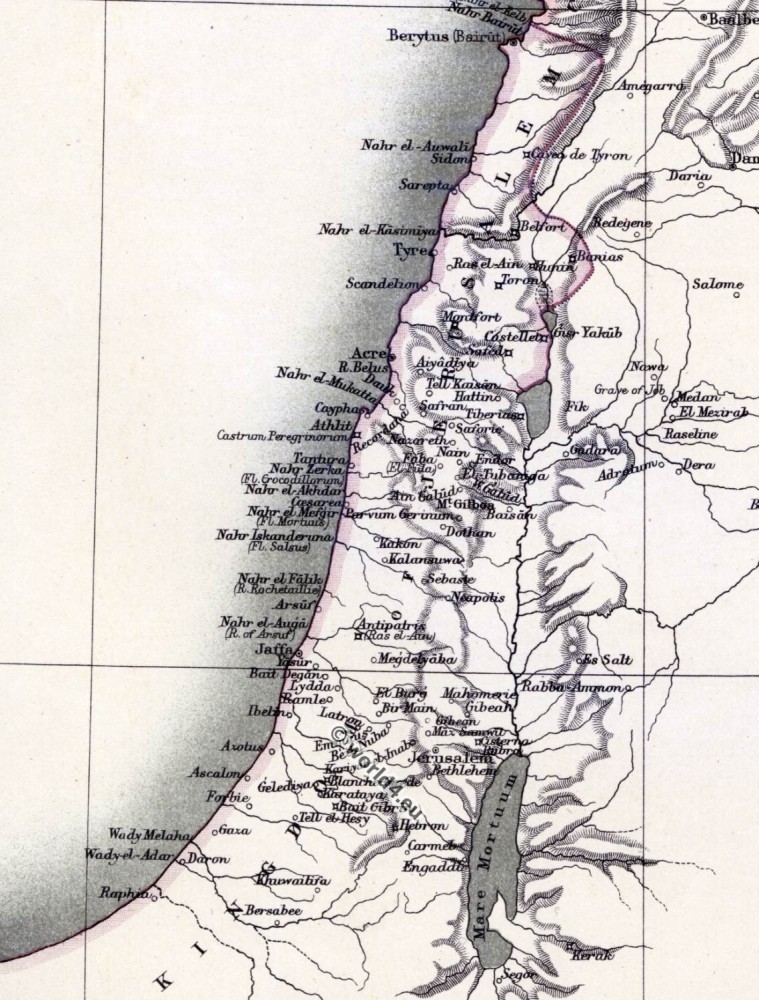 The kingdom of Jerusalem

The kingdom of Jerusalem

The kingdom of Jerusalem properly so called extended, at the time of its fullest development, from the Nahr Ibrahim to El-Arish on the confines of Egypt (beyond the limits of the map). According to the traditions of the thirteenth century, it was subdivided into some twenty-one greater fiefs, each owing a specified number of knights and sergeants to their overlord the king. These fiefs are: (I) Jaffa and Ascalon; (2) Ramla or Rames; (3) Ibelin; (4) the’principality’ of Tiberias, including the city of Tiberias and the stronghold of Safed (Saphet); (5) the lordship of Sidon and Beaufort; (6) of Caesarea; (7) of Beisan; (8) of Kerak and Montréal beyond the Jordan and Dead Sea; (9) of St. Abraham or Hebron; (10) of Blanchegarde, i.e. Tell es-Safi; (11) the bishopric of Lydda; (12) the lordship of Arsuf; (13) of Haifa; (14) and of Caymont; (15) the archbishopric of Nazareth; (16) the’fief of Count Joscelin’ (probably between Tiberias and Acre or Sidon); (17) the lordship of Scandelion; (18) of Tyre; (19) of Toron or Tubnin; (20) of Belinas or Caesarea Philippi; (21) of Beirut. It is obvious however that this list is made up of heterogeneous elements, and it is hardly possible that all these fiefs can have existed at one and the same time (In the map the name Dera, east of Adratum, should be omitted.).

In the following list of places alternative names have been placed side by side for the convenience of those using the contemporary narratives.

Topics to the crusades: