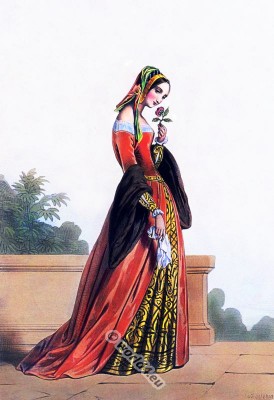 French lady fashion during the reign of Francis I. 1513.

Francis I. (1494-1547) is considered the first king of the French Renaissance. During his reign, there is a significant development of the arts in France. Its two predecessors, Charles VIII. and Louis XII. have spent much time in Italy, but it was not possible for them to bring the new culture and artistic movements that developed there, to France. But they laid the foundations for the later flowering of the Renaissance in France. Francis I. can bring many artists to France, including Andrea del Sarto (1486–1530) and Leonardo da Vinci (1452–1519). Leonardo da Vinci will remain until his death in France.