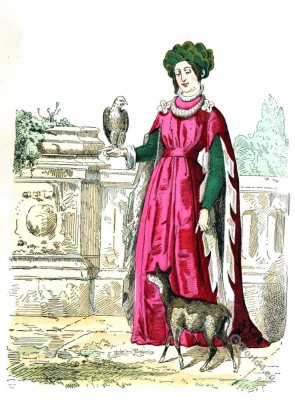 Madeleine of France also called Magdalena of Valois (1443 – 1495), a French princess, daughter of Charles VII, King of France and Mary of Anjou, became Princess of Valois by marrying the heir to the kingdom of Navarre, Gaston de Foix. Gaston de Foix (1444 – 1470) was the eldest son of Gaston IV, Count of Foix and Bigorre, Viscount of Béarn, and Queen Eleanor of Navarre. As the heir of Navarre since 1464 he carried the title of Prince of Viana. Gaston de Foix was killed in a tournament on November 23, 1470. Because he died before his parents, he was never Count of Foix etc. or King of Navarre; yet he is referred to by some authors as V. Gaston of Foix. He was only Viscount of Castelbon – this title his father had given him already in 1462. Gaston and Madeleine had two children: François Phébus (1466-1483), 1479 King of Navarre. Cathérine (1470-1517), 1483-1512 Queen of Navarre.