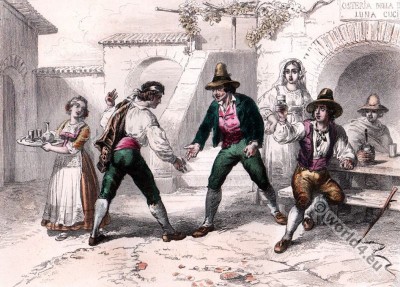 Game of mora in Boulogne.

Morra is a traditional game using the hands, which is known especially in some Mediterranean countries, especially in Italy. It reminds at first glance to the game Rock-paper-scissors, and of even and odd. The Morra game in the modern sense was during the Roman Empire under the name Micatio or in verbal form micare digitis (“Twinkle Fingers” with the fast fingers) known and widely used. A Roman proverb describing an honorable person with: dignus est quicum in tenebris mices (a person with whom you can play in the dark Micatio. In Fascist Italy Morra was banned in 1931 as gambling in public places, because it was used for betting and allegedly led to quarrels and fights. The game was canceled in 2001 in the province of Trentino from the list of prohibited games, the rest of Italy, there is a prohibition on. Today Morra is still played in several regions in northern and central Italy.