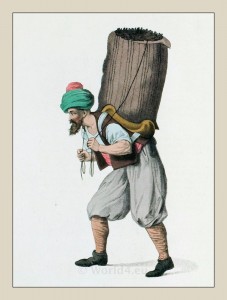 A HAMAL OR COMMON PORTER.

A Hamal or common porter.

THESE men are very numerous, particularly at Pera (Beyoğlu), where they are employed in reming the various goods and merchandise. Those, who are of Armenian origin, are reckoned the strongest, and carry an immense weight; sixteen of them, (according to Dallaway) with their arms in some manner interlaced, will frequently carry up the steep declivity from the quay of Galata (Karaköy) a cask of wine of such immense weight, suspended by a pole, that each person must support near three hundred pounds. The mode, in which they individually carry, is seen in this plate, and differs from the English, who confine the burden entirely to their shoulders, while the Turks distribute it between the shoulders and the hips.