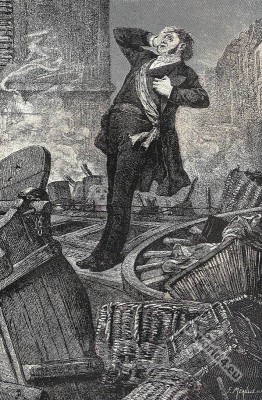 The Death of Baudin

The Death of Baudin. History of a Crime by Victor Hugo.

The crime of the schoolmaster is to hold a book open; that suffices; the Church condemns him. There is now, in France, in each village, a lighted torch – the schoolmaster, and a mouth which blows upon it-the curé. The schoolmasters of France, who know how to die of hunger for Truth and Science, were worthy that one of their race should be killed for Liberty.

“Baudin was killed,
“He had remained standing in his position on the omnibus (in the barricade). Three balls reached him. One struck him in the right eye and penetrated into the brain. He fell.’

From the book: Character sketches of romance, fiction and the drama by Rev. Ebenezer Cobham Brewer, 1892. A revised American edition of the readers handbook. Edited by Marion Harland. Free ebook. Amazon

Victor-Marie Hugo 1802-1885, was a French writer. He wrote poems and novels and plays and worked as a literary but also a political publicist. His work is part of the romance, partly associated with the realism. About a quarter of his texts after 1849 are politically motivated and committed. His position seems contradictory at first glance: He defends the profit motive and speaks at the same time for social justice. He is liberal, but against people who accumulate profits rather than reinvesting the benefit of all. Several of his works have been set by the Vatican on the Index of Forbidden Books.

* Félix Antoine Philibert Dupanloup 1802-1878, was a Roman Catholic Bishop of Orléans. Temporarily headed Bishop Dupanloup the Petit Séminaire de la Chapelle-St-Mesmin near Orléans, where he also the young Paul Gauguin taught in Catholic liturgy and philosophy, which should greatly influence his artistic development. In 1875 he published his book against Freemasonry: Etude sur la Franc-Maçonnerie. During the mid-19th century he was spokesman for the liberal wing of French Catholicism.

The History of a Crime: Free ebook. Amazon