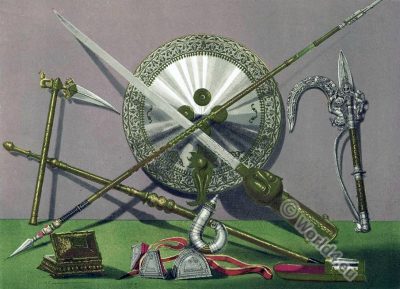 ALTHOUGH the number of arms was not nearly equal in the present Exhibition to the number contributed in the year 1851 at London, and in 1855 at Paris, there were nevertheless numerous choice specimens of fine workmanship to be seen, from among which we have selected a fine old gauntlet cavalry-sword, from the Indian Museum; a rhinoceros-hide shield, inlaid and studded with metal, from Kutch*, in Sindh; portion of a richly-embossed gold-plated lance of state, contributed also by his Highness the Rao of Kutch (Khengarji III (b. 1866 – d. 1942); another spear, borne as a mark of royalty before the Rajah of Tringanu; a fine gold inlaid battle-axe; horn priming-flask, &c, from Kutch; and a magnificent old open-cut steel ankus, or elephant-driver’s spear, contributed by Kenneth McLeod, Esq.

* Kachchh (Gujarati “land on the seashore”; English Kutch or Cutch) was a princely state of British India north of the Kathiawar Peninsula in what is now the state of Gujarat between the Gulf of Kutch and Pakistan. Much of the land occupied by the Great Rann of Kutch. According to the legend consists Rajput-state with its capital Bhuj since 1147. He came in 1591 under the suzerainty of the Great Mughals. The Principality Morvi was created in 1697 by inheritance. The Raos of Kutch took 1757 the title Maharaja Adhiraj Mirza Maharao. 1815-1947 was the Principality British protectorate of British India.

The box and sword-handle are fine specimens of the damascened work, called in India “koftgari;” chiefly executed, as stated by the Central Committee, at Lahore, Goojerat, and Kotli, in the Sealkote district, Punjab. The articles exhibited were made by Kotli artisans; and a medal was awarded by the International Committee of Class 33 to Man-ud-din, of Sealkote, for his work in this style; the Reporter adding that the Jury consider his specimens “the most perfect of the kind that have ever been exhibited.” Mr. Dowleans remarks that the inlaying of steel with gold has in former days been carried on to a considerable extent in various parts of India: it was chiefly used for decorating armour. Since the late rebellion in India, the manufacture of arms has been generally discouraged, and koftgari-work is now chiefly applied to ornamenting jewel-caskets, pen and card trays, paper-knives, inkstands, &c. The process is exactly the same as that pursued in Europe, and the workmen can copy any pattern set before them. The work is highly finished and remarkable for its cheapness. We may add that it can be produced at about a quarter the price similar works sell for amongst us; and that for delicacy of manipulation it rivals, if it does not surpass, the best Milanese examples of the 16th century, the box we have selected being finely damascened inside as well as out. We did not illustrate another kind of damascening,—an inlay of silver on a mixed metal, so well known as “bidri-work“.

Persia and India have from time immemorial been celebrated for their decorative armour and arms, and bear off the palm in elegance of design, ingenuity of device, and delicacy of workmanship, from all the world. The taste and care displayed upon them is really wonderful. Among other curious devices may be mentioned shields with pistols concealed in the centre, to be fired whilst the bearer is covering his body; double-bladed swords; and daggers which, on striking, form five distinct blades. Armourers formed part of the regular establishment of every native prince, and were employed in fashioning and ornamenting the fine native steel, called “wootz,” the beautiful Damascus blades, the twisted barrels of the matchlocks, the battle-axes, spears, and other weapons in which the Eastern potentate delights to lavish his wealth.

As regards the general metal-work exhibited in the Indian department, it presented many interesting features. We remarked particularly some incised iron door-handles and locks of a Medieval character, apparently very ancient, from Patna and Nepal. A most curious example of Indian ingenuity was the iron umbrella from Patna, which contained an inkstand, dagger, spear, scissors, &c, and could also be converted into a lantern. The brass-work from Hooghly and North Arcot was of a very ornamental character, and good. The castings in brass from Nagpore exhibited the cleverness of the Indians in casting minute and elaborate designs in brass, done by the cire perdue process. The plated brass and engraved objects from Moradabad were remarkable for the beauty of their incised ornaments. The praying-wheels used by the Llamas of Tibet, and the brass sacrificial lamp from Nepal, were very interesting examples of native art. The iron and tin armlets and ankle-rings, made in Bengal and Madras, were examples of clever casting; they are made in great quantities, in a rough fashion; are very cheap, and are formed in the patterns of the rich jewellery of the wealthy, including the stone-settings.

We will conclude with recording the adroitness of Setarum, chief smith of the Rajah of Ulwar, who forwarded to the Exhibition two muskets in one, of most ingenious construction, each being perfectly serviceable.

Source: J.B. Waring’s “MASTERPIECES OF INDUSTRIAL ART & SCULPTURE” published by Day & Son in London in 1863. Dedicated to her Majesty, the Queen.