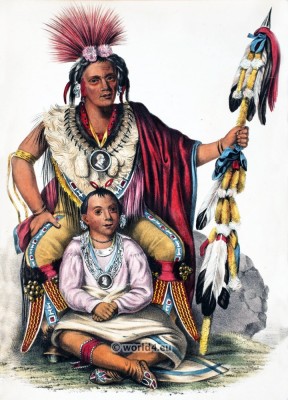 Keokuk (with his son), a chief of the Sac and Fox

Chief Keokuk (Kiyo`kaga c 1780-1848), a chief of the Sauk or Sac tribe. As chief of the Sauk and Fox, he was one of the most important chiefs in his time. He could make great speeches and was also a skilled leader. His contemporary Black Hawk was also a chief of the Sauk. Both, however, differed in their direction: Black Hawk was belligerent towards the United States and Keokuk friendly. Keokuk was not against white culture elements when these appeared useful to him. The tribe sold after the war of 1812 parts of the tribal region, which supported Keokuk. At the Black Hawk War in 1832 against the white settlers led to Keokuk not involved. After the defeat of Black Hawk and his two sons has been captured. Keokuk has now been appointed at Fort Monroe by General Scott, with the consent of the tribe to the head chief of the Sauk and Fox.

In a process in Washington, where Keokuk appeared as counsel against the ownership of the Sioux on an occupied territory of his tribe, he won it with his oratorical skills and his expertise.

The wise Keokuk had recognized the futility of armed resistance, and saw the superiority of whites.
1848 Keokuk died. 35 years after his death – in 1883 – his remains were buried with great ceremony in the city that now bears his name in the state of Illinois and erected a monument. In the Washington Capitol reminiscent of Keokuk, and a bust of the painter George Catlin immortalized him on one of his paintings.