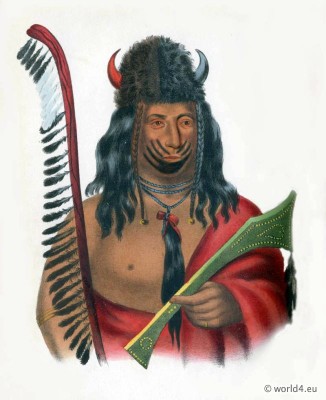 AMONG the Fox braves who appeared at Washington in 1837, on the occasion to which we have already alluded, was Kishkekosh, or The man with one leg, whose name, however, is not descriptive of his person; for we discovered no deficiency in the limbs of this individual. At the council which we described in the life of Keokuk, where the Sauks and Foxes were confronted with the Sioux, Kishkekosh appeared in the same hideous headdress which is exhibited in the picture, and the attention of the spectators was strongly attracted by this novel costume. The buffalo horns and skull upon the man’s head would have rendered him conspicuous in a grave assembly collected for a serious purpose, in the presence of a numerous and polished audience; but this was not sufficient for Kishkekosh, who, when his party were all seated, stood up on a bench behind them, so as to display his full stature, and attract the special notice of all eyes. It was seen that this exhibition was not lost upon the Sioux, who whispered, exchanged glances, and were evidently disturbed. Those who were merely spectators, and who knew nothing of the personal history of the strange beings before them, were amused at what they supposed to be a piece of savage buffoonery, and could not help smiling at the ludicrous contrast between the uncouth figure perched up against the wall, and the silent, motionless group of grave warriors who sat before him arrayed in all the dignity of barbarian pomp.

We learned afterwards that the intrusion of the buffalo head was not without its meaning. It seems that, on a certain occasion, when some skirmishing was going on between these hostile tribes, Kishkekosh, with a single companion, charged suddenly upon the Sioux, rushed into their ranks, killed several of their warriors, and retreated in safety, bringing off, as a trophy, this buffalo head, which Kishkekosh tore from the person of one of the slain. Such exploits, which are not uncommon among the Indians, resemble some of the deeds of antiquity, or those of the knights-errant of a later age. Acts of desperate valor, leading to no practical advantage, but undertaken in mere bravado, must often occur among a people who follow war as their main employment, and who place a high value on military glory. Among savages especially, or any rude nation whose warfare is predatory, and made up chiefly of the exploits of individuals or small parties, such deeds are estimated extravagantly, not only on account of the courage and conduct shown in them, but because they afford themes for biting sarcasm and triumphant boasting over their enemies. Such, doubtless, was the light in which this deed of Kishkekosh was viewed by his tribe; and when they were to meet their enemies in a public council, at which a large number of persons were present besides the hostile parties, they tauntingly displayed this trophy with the deliberate purpose of feeding their own hatred and insulting their foemen.