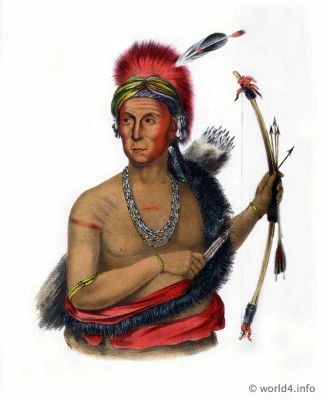 THE word Powasheek, in the Musquakee language, signifies “To dash the water off.” The individual who bears this name is a celebrated brave of the Musquakee or Fox nation, and is numbered among their chiefs or leading men. A few years ago he was better known to the whites than any other person of his nation, and was probably at that time the most influential man among them. The superior talents of Keokuk have, however, thrown into the shade all the leaders who once stood high in the combined Saukie and Musquakee nation, and Wapella, the Fox leader, being a chief of great address, and a friend of Keokuk, Powasheek has been little heard of, during late years, in public life. He was a daring warrior, and held a respectable standing in council, as a man of prudence and capacity. The likeness is a good one, and gives a correct idea of his character.
Powasheek is one of those men who, though highly respected, and holding a rank among the first men of their nation, are not distinguished by brilliant talents. Nothing very striking in his history has reached us.