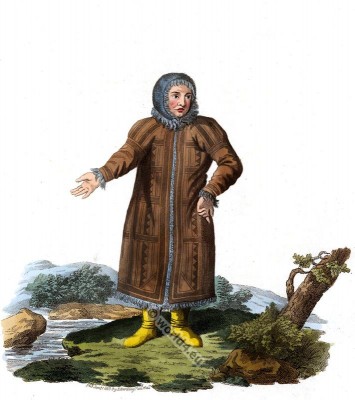 An Ostyak of the Ob.

A Khanty, Ostyak of the Ob in traditional dress, 1803.

ON the conquest of Siberia by the Tartars, they distinguished the inhabitants by the name of Uschtiak, a word denoting in their language, savage or barbarian. This appellation was afterwards adopted by the Russians, with a small alteration; and is now retained by three nations, distinct from each other in descent and language, the Ostyaks of the Ob, of the Narym, and of the Yenessei.  The Ostyak of the Ob is the subject of the present article. This nation is very numerous, and although the severity of the climate and the wretchedness of the inhabitants are unfavourable to the increase of population, a sensible diminution of their number is not to be discovered. They rarely exceed the middle size; are generally flat visaged, with straight, red hair, yellowish complexion, and light beard. They are dull of comprehension, and much inclined to superstition. Their knowledge of figures extends no further than the number ten. They divide their time by months, and not years; their first month commences with the new moon in October. The art of writing is unknown amongst them, but on particular occasions they have conceived the means of supplying this deficiency. If, for instance, they wished to engage their allies to unite in some military enterprise, it was customary to send them an arrow. The chief who first received it, dispatched it instantly to the chief of the neighbouring tribe, and by this means it was speedily conveyed to a considerable distance.

Their clothes are generally made of the skins of animals, or of furs. The men wear short trowsers, and skin stockings, which serve them for boots, and are strengthened at the sole by an additional skin. A jacket is worn next the skin, and over that another much longer, which is furnished with a hood that entirely conceals the head, and leaves only the face uncovered. In the very severe weather they even wear a third over the other two.
The Ostyaks have two idols which they honour with a particular reverence: one carved in the form of a man, the other in that of a woman. The men worship the male, the women the female idol. Every hut has its particular household divinity, which is nothing more than an ill-shaped figure. To these domestic idols they offer the skins of small animals, birds, fishes, &c. The Ostyak priests are called Totibi. They interpret dreams, foretell events, raise spirits, cure the sick, and offer up prayers and sacrifices. They arc called in on all important occasions ; by the assistance of their drum, they pretend to discover the cause of the wrath of the gods, and the sacrifices necessary to be offered up in order to appease them.