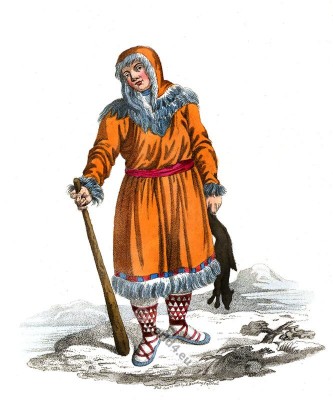 A Koriak in traditional Kamtchatka dress.

THE Koryaks are, principally, scattered to the north of the Pengina lake and the peninsula of Kamtchatka, as far as the coasts of the Eastern Ocean. It would be difficult to mark out, precisely, the limits of the territory they occupy, as it is intersected, in several places, by the habitations of the Tschutski, the Kamchatkadales and the Tongusians. The conformity of their features, stature, customs, and manners with the inhabitants of several of the Aleutian Islands, and even with the people of America bordering upon the eastern confines of Siberia, furnish us with reasons for believing, that these nations arc of one common origin. So striking a resemblance exists between the language of the Koryaks and the Tschutzki, and that of several tribes of the Eastern islands recently discovered, that they appear to be only different dialects of the same tongue.
This people are divided into wandering Koryaks and stationary Koryaks. The latter are to be found to the south, and differ little from the Kamchatkadales; their huts are constructed in the same manner, but are more cleanly. They live principally by the chase. The wandering Koriaks are chiefly found to the north of the former, and are occupied in conducting into pastures of moss, their numerous troops of rein-deer.
Accustomed to stop at no place, but with the intention of abandoning it as soon as these animals have devoured the produce of the ground, they dig no permanent dwellings, but construct moveable habitations, similar to those in use among the Kalmucs and all wandering’ nations.
The Koryaks dress in the same manner as the inhabitants of’ Kamtchatka, but, unlike them, their hair is always clipped close to the skin. In then’ winter excursions they make use of light sledges, drawn by rein-deer; but they know not how to ride upon these animals, like the Tongusians, and in summer time they travel on foot. They live upon the flesh of the rein-deer, and of every animal they meet with, excepting the dog and the fox.