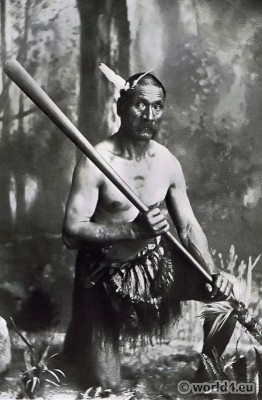 The Taiaha (also called Hani) is mace and spear of New Zealand’s indigenous people, the Māori.

The Taiaha was developed by the Māori as a melee weapon. Is taught in the handling Mau Rakau, the māori martial arts. The Taiaha grounds contain hardwood and is divided into three parts: arero (hammer head) with the upoko (head, shock tip) and the tinana or ate.

The shaft (handle) is round in cross section. At one end it has a spear-shaped leaf (arero) and at the other end a broad impact head (ate, tinana). The spear tip is made of wood and decorated. The impact head end is wider from the middle of flat and round up to the end. This end is cut straight and is similar to a boat paddle. This end is used for pounding, to stab the other.

The flip side flat and the tip or tongue (arero) are elaborately decorated with carvings, as an ornamental deposits (for eyes) are occasionally New Zealand Paua abalone snail (Haliotis iris). Below the tip of a wreath of hair is attached.  The length of the Taiaha is about 150 cm (rarely longer). There are occasional variants in which a spearhead of jade was used.

From the book: Picturesque New Zealand (1913) by Paul Gooding. Photography by Muir & Moodie; and Josiah Martin.